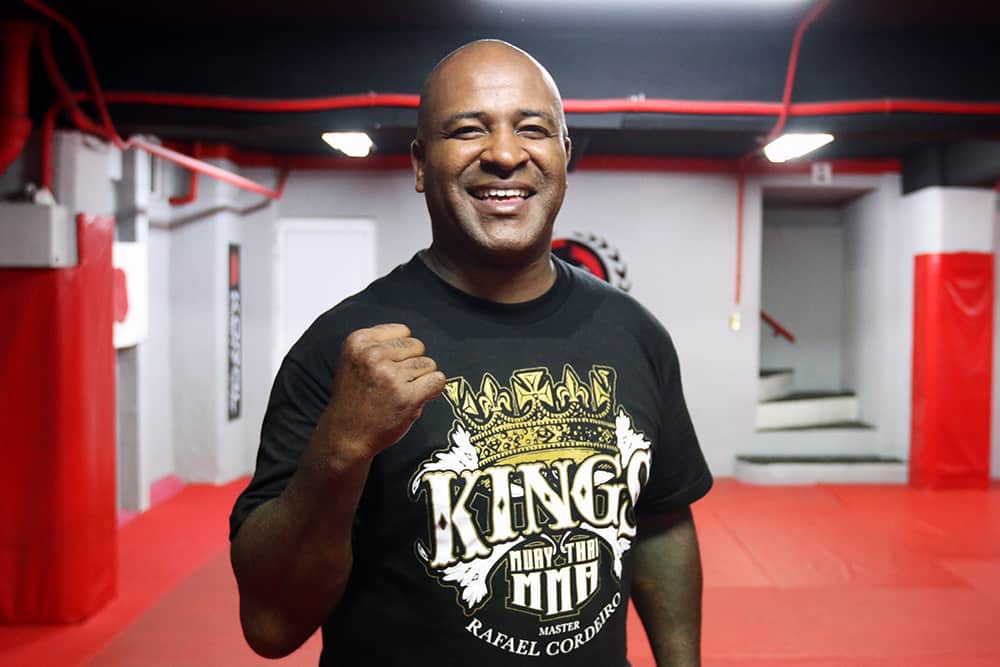 Rafael dos Anjos completed his triumphant rise to the top of the lightweight division this past weekend (March 14, 2015) at UFC 185, when he brutally battered the favored champion Anthony “Showtime” Pettis to steal the belt.

Having been in the UFC for over six years, dos Anjos only recently hit his stride, scoring a knockout win over former champion Benson Henderson last August, destroying Nate Diaz last December, and now dismantling Pettis.

RDA deserves all the credit, but his coach, Rafael Cordeiro, is also receiving a great deal of credit due to his role in turning dos Anjos from a Brazilian Jiu-Jitsu ace into a well-rounded mixed martial artist, possessing brutal striking.

Having worked with dos Anjos for over 10 years, Cordeiro spoke with Combate (quotes transcribed by Bloody Elbow) recently on the Brazilian’s hard-earned success. Now being crowned champion, Cordeiro said that dos Anjos fought like a champion before he even was one, dominating the flashy Pettis like a true champion:

“Rafael is a great athlete, I love to work with him,” Cordeiro said. “We’ve been going strong together for the past 10 years. Most of my fighters enter fights as underdogs, but we use that as motivation.  We knew how to beat Pettis in every aspect of the game, and everything we practiced led us to this victory. Rafael fought the champion and also as a champion. He was dominant like a champion, and it certainly was the best performance of his life. It’s not everyday someone dominates Pettis like that.”

After the fight, shocking news came from the newly named champion with dos Anjos saying that he fought with a blown MCL, an injury he suffered just a few weeks back. Cordeiro, however, said that RDA’s will power was stronger than the pain, and the thought of pulling out of the fight never occurred to the Brazilian:

“I don’t really like when a fight ends and one of the guys says he fought injured. Though Rafael did, I know he’s not looking to take advantage of that. His will was much stronger than the pain. He ignored it for three weeks, not even kicking with his right leg, but still fought like a champion.  What happened was that one day he wore a shin pad that was a bit big for his size, so it slipped down his leg and then it twisted his knee.  I was worried at first, but afterwards he was able to pull through with only one leg.”

After the event, it was also made clear that dos Anjos’ first title defense would likely be against the winner of UFC 187’s fight between top contenders Khabib “The Eagle” Nurmagomedov and Donald “Cowboy” Cerrone.

“Khabib will probably win and then we can erase that loss that’s been bugging us so much.  It’ll be a tough fight, our wrestling and jiu-jitsu will have to be on point, but this time we will break him down. Our time has come and we will go strong.”

Can dos Anjos hold on to the belt for some time, or is “The Eagle” destined to be champion?