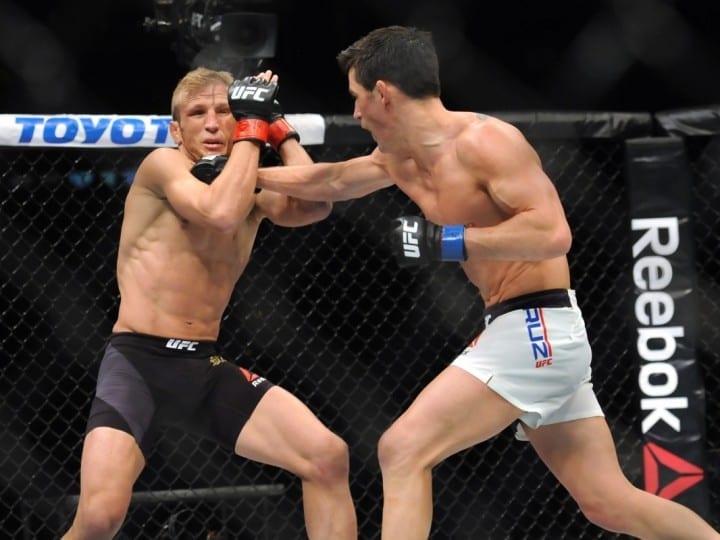 Returning from nearly four years of painstaking injury recoveries, former UFC bantamweight champion Dominick Cruz made a triumphant return against then-current champion TJ Dillashaw in the main event of last night’s (January 17, 2016) UFC Fight Night 81 from the TD Garden in Boston, Massachusetts, winning back his belt in possibly the most riveting and emotional scene the Octagon has ever seen.

The main event bout was a close, back-and-forth affair that was tough to score and all over the place on the judges’ scorecards. Cruz used his trademark elusiveness to slip out of the way of Dillashaw’s strikes, and he also became the first man to take ‘The Viper’ down in the UFC with several successful attempts. The first announced score was 48-47 for Cruz, then a somewhat surprising 49-46 for Dillashaw, and when the final score was announced 49-46, it would have seemed the former champ had retained his title.

But Octagon announcer Bruce Buffer announced the result as “And New,” capping Cruz’ long-awaited return off with an emphatic reclamation of the title he never lost. The UFC will now hold their breath as it appeared Cruz badly hurt his foot late in the fight, but for now, check out the highlights of his emotional, title-sealing win right here: