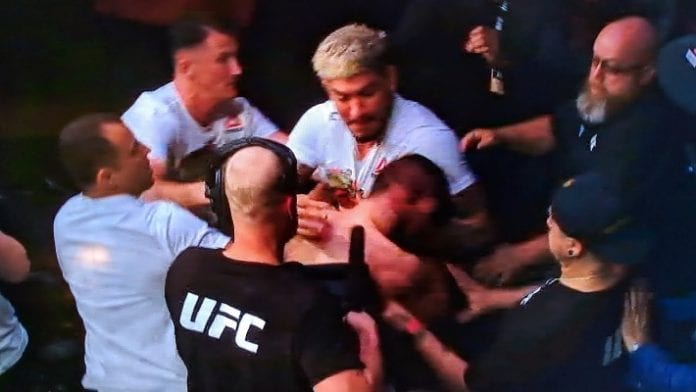 Back at UFC 229 in October of 2018, a massive brawl ensued after the conclusion of Khabib Nurmagomedov vs. Conor McGregor.

After submitting McGregor in the fourth round to retain his lightweight title, Nurmagomedov jumped the Octagon to attack McGregor cornerman Dillon Danis, who Khabib alleges yelled a racial slur at him. All parties involved were punished accordingly, but in regards to the brawl, Danis tells “The Schmo” Khabib didn’t connect on him at all. (H/T MMA Junkie)

“No, he didn’t connect,” Danis said. “You know what’s funny, when he jumped over the thing, and he had his feet and his arms up, so like, he didn’t really know what he was going to hit me with. So I was like, am I going to get kicked right now or punched? I kind of just blocked then I hit him with a right hand, and then I remember him coming forward, and I was uppercutting him, and then he was just trying to run away, and I was trying to grab his head.

“It was just a whole mayhem and then everybody was getting punched, and cops were going all over the place, and … he didn’t touch me at all. I remember hitting him with a good amount of shots, and then I just remember him trying to pull away and run away from me, and I was trying to cup his head and uppercut him. But it was mayhem. Everything happened so fast.”

Nurmagomedov will make his return to the Octagon when he puts his 155-pound title up for grabs against Tony Ferguson at UFC 249 in April. As for Danis, he’ll take on Kegan Gennrich at Bellator 238 on January 25 for this third MMA fight.

What do you think about Danis’ comments regarding his brawl with Nurmagomedov?