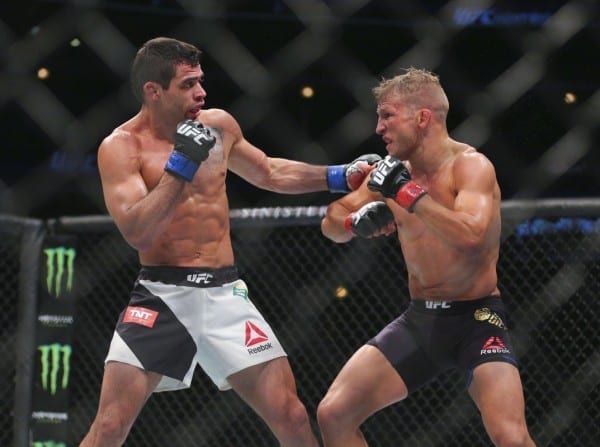 Amidst a terrible week for Reebok in the form of longtime cutman ‘Stitch’ Duran’s controversial firing, Dana White’s Twitter tirade, and a brutal fan backlash, fighters took home a disclosed $212,500 in sponsorship payouts for last night’s (Sat., July 25, 2015) UFC on FOX 16 from the United Center in Chicago, Illinois.

With a new tiered pay structure in place based on the number of fights a competitor has under the Zuffa brand, main event title participant T.J. Dillashaw and Renan Barao earned the biggest paydays for their bantamweight championship bout (watch highlights here). Dillashaw took home $40,000 as the champion and Barao earned $30,000 as the longest tenured fighter on the card.

The next highest paying bout was a lightweight affair between gritty veterans Jim Miller and Danny Castillo, which Miller edged out by split decision. Castillo made $20,000 as the next highest-tiered fighter on the card, while Miller made $15,000.

The Reebok pay system has been notoriously blasted for providing fighters with supposedly bargain-basement sponsorship pay, and even though they will get 20-30 percent of any merchandise bearing their likeness, popular athletes like Miesha Tate, who earned a paltry ,500 for her dominant co-main event win over Jessica Eye (highlights here), should be losing quite a massive haul in terms of sponsorships.

We’ll just have to wait and see if the reception improves, because the deal isn’t going anywhere soon. But judging by the initial reaction from fans online, not all that many of them will be buying Reebok UFC gear anytime soon.

Here are the full Reebok fighter payout numbers from UFC on FOX 16 as compiled by MMAjunkie.com: