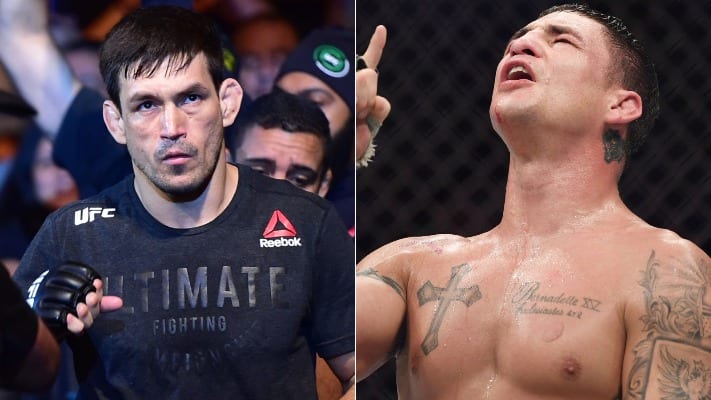 Demian Maia continues to compete at the highest level of mixed martial arts (MMA) competition despite being 41-years-old.

Last night (Sat. June 29, 2019) Maia picked up a second-straight victory inside the Octagon at UFC Minneapolis by defeating Anthony Rocco Martin. Maia out-pointed Martin after three rounds from the Target Center. Speaking to MMA Junkie after the contest, Maia admitted he only has one or two fights left in him before calling it a career.

Ideally, the Brazilian would like to retire in his native country later this year in November. As for his opponent, Maia suggests a meeting with a fellow UFC veteran, Diego Sanchez:

“Maybe (his next fight) will be the last one – I hope to do that in Sao Paulo in November,” Maia said. “Diego Sanchez is asking to fight, so it would be a good fight, two veterans. After that, maybe I do a couple more. But for sure, this year or next year, I’ll stop and retire.”

Being so far into his career, Maia said he still feels great physically and continues fighting for his love of the sport. However, he has other projects he wants to invest in, which he’d have to step away from fighting in order to pursue:

“I feel pretty well, and I feel that in training,” Maia said. “That’s why I keep going, because I love what I do. If I start to feel my body, then I will stop. Because I feel so well, I keep going.

“But I have other projects that I want to do, and that’s the only thing that makes me think about stopping. It’s more about the other things I want to do.”

What do you think about a possible matchup between Maia and Sanchez?