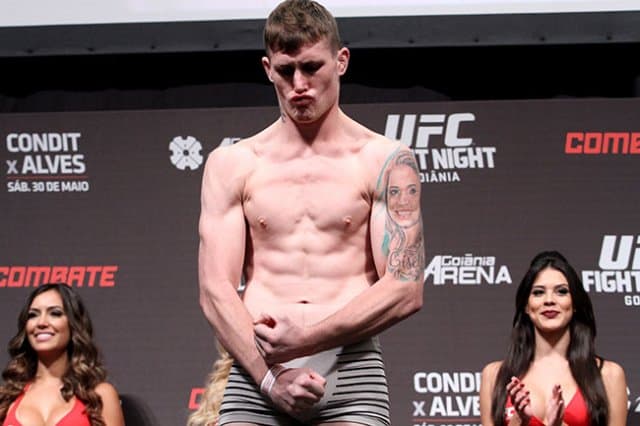 Asked repeatedly, Darren Till updates status of UFC 228 weight cut. And he’s vowed to slap anyone who asks about weight cutting after he makes weight.

Till will challenge champion Tyron Woodley for the welterweight title Saturday night (Sept. 8 2018) in the main event of UFC 228 in Dallas, Texas. The brash UK fighter has had his issues making the 170-pound mark in the past.

However, during an open workout held the Wednesday of fight week Till revealed that he only has 12 pounds left to go in order to make the championship weight of 170 pounds.

As stated earlier, Till missed weight for his last fight against Stephen Thompson by three pounds earlier this year. Prior to that he easily made the 170-pound mark against Donald Cerrone. Till has missed weight two out of his six UFC fights.

“I’m never gonna say it’s a great cut, it’s always hard,” Till said. “But listen, I’m lean, I’m focused. Weight’s OK. I never want to stand here and say the weight is great, this has been the best weight cut. Because the fighters do that and I just don’t agree with it. It’s a lie. Weight’s not great. I don’t want to speak to anyone. I just want to get me things done. It’s business. Business is business. And Saturday is business, Friday is business. My life is this business.”

With a record of 17-0-1, Till has a chance to do what few before have been able to accomplish. That is, become an undefeated world champion. However, Till’s weight will continue to garner the majority of the headlines as UFC 228 approaches. So much so in fact that the UFC has paid Kamaru Usman to make weight as a plan B in case Till misses weight again.

“I’ve put my life into this, so speed bumps along the way,” Till sad. “Not making weight, you get all this attention for it. It’s like you’re the only fighter who’s missed weight in the division, in the whole of the UFC. … It’s a mistake on my part, but Friday all the talk will be done. No mother f*ck*r can ask me about weight again — he’s getting slapped.”