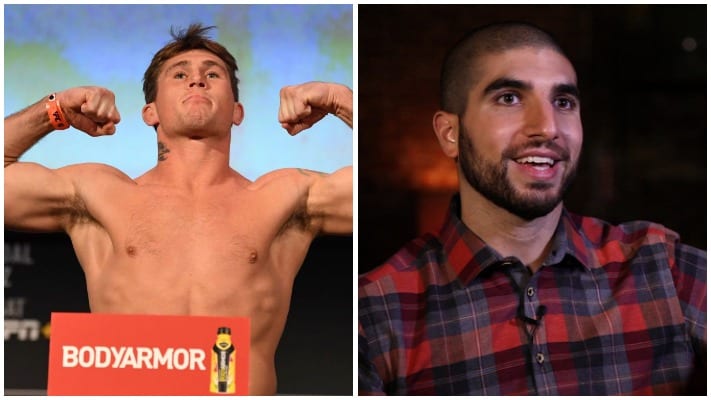 Till started the conversation by blasting Helwani who he called a “bitch” on Twitter.

“The tough guy act is over. The Darren Till act is now. MMA needs this. Getting offended is over rated. You feelings bitch. Ariel Helwani you are a bitch.”

The Liverpudlian wasn’t done there though and proceeded to call the MMA journalist a “dirty rat” when prompted by a fan.

Helwani quickly fired back using one of Till’s popular comebacks against the fighter the ESPN reporter said. “I’m not going to shag you mate.”

Unfortunately for Helwani his tweet backfired when Till doubled down claiming the Canadian had just messaged him asking to watch some pretty graphic stuff, he wrote.

“U just sent me a DM saying you wouldn’t shag me but would 100% watch me which is it Ariel?” Till then posted a screenshot of a text from Helwani which read. “You know Darren? I would 100% watch you…”

Till hasn’t fought since beating Kelvin Gastelum in his middleweight debut last year. The former welterweight title challenger beat the TUF winner by a decision to bounce back from consecutive losses against Tyron Woodley and Jorge Masvidal. He’s hoping to get the chance to face Robert Whittaker next, even if it has to take place on Dana White’s Fight Island. The fight was originally set to take place at UFC Dublin this August although that now appears unlikely.

The 27-year-old has been keeping himself entertained during the coronavirus induced lockdown by becoming one of the must-follow MMA fighters on social media. Unfortunately for Helwani, he was in the firing line last night and things got weird.

What do you make of Darren Till and Ariel Helwani’s sexually charged Twitter exchange?