LowKickMMA.com
Home UFC News Danielle Kelly On Grappling Match With Carla Esparza: ‘I Made Her Bleed... 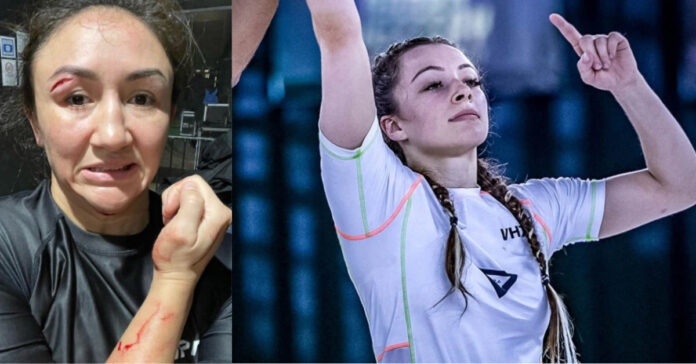 Brazilian Jiu-Jitsu phenom Danielle Kelly says she made Carla Esparza ‘bleed more than Rose’ Namajunas did, when asked about her grappling match with the current UFC champion.

One FC’s Danielle Kelly is a veteran of Fury, ADCC, and UFC Fight Pass Invitational, having made somewhat of a habit out of defeating high-profile UFC fighters. The 26-year-old BJJ blackbelt has picked up wins over Cynthia Calvillo, Roxanne Modafferi, and the aforementioned Carla Esparza.

As part of One FC’s partnership press conference, Kelly spoke to ‘The Schmo’ and was asked about Esparza.

“I made her bleed more than Rose!” Kelly joked. “I mean they’re all tough girls, I’m a very small jiu-jitsu competitor so all the girls that I face, their MMA fighters, they’re like 130 so it’s really tough.”

“So when I was grappling with her,” Kelly said when asked how Esparza will fare as champion, “I knew she was going to be heavier than me cause I think she was walking around 140, 135. When she was in my guard it was hard to pull her arm across so I was like this is a really strong strawweight.”

“I feel like she may be the champion for a while, I’d like to see her and Weili [Weili Zhang], Weili is very talented, she a good and strong. That’s a good matchup, I may have to go Weili.”

With Kelly’s signing with One, and the promotion’s willingness to allow athletes to transition into other sports such as BJJ to MMA and mixed rules bouts, it only seems a matter of time until Kelly puts on the 4oz gloves.

“When my coaches give me the ok,” Kelly said when asked when we can expect the switch to MMA. “I don’t wanna just jump in there and get beat up but I challenge myself every day in the gym and it just depends on my coaches.”

Would you like to see Danielle Kelly move to MMA?