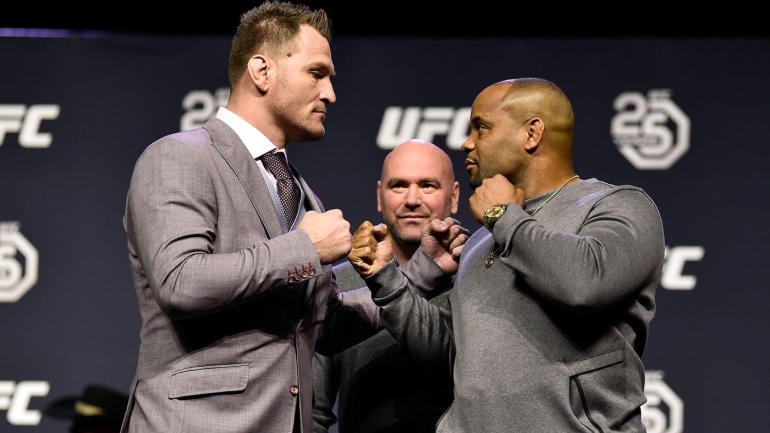 Daniel Cormier has bad intentions for Stipe Miocic ahead of their UFC 241 main event this weekend (Sat. August 17, 2019).

“DC” will defend the UFC heavyweight title against Miocic, the very man he took the title from last summer, in what should be a great contest. The first time out, Cormier finished the Cleveland native in the first round via knockout. Things were very cordial between the two prior to the meeting, but that seems to have changed as UFC 241 approaches.

Miocic has given off the feeling that he’s annoyed by Cormier. Speaking on “The Ariel Helwani MMA Show” today, Cormier said he and Miocic don’t have to like one another. In fact, there are things about Miocic – who Cormier described as a “brat” – that the heavyweight champ doesn’t like either.

“I respect all that he does for his community and everything. But there are some things about him that annoy me too,” Cormier said. “Him sitting out this whole time, kind of being a little bit – I feel like he acted a little bit like a brat. Like, ‘I should get a rematch.’ I just thought he should’ve fought again.

“Kind of rubbed me the wrong way, but it worked. Now he gets a shot to fight for the title again. So, yeah, there are things we both dislike about each other. But at the end of the day, I’m not losing no sleep about Stipe Miocic not liking me.”

Cormier has said he wants to “ruin” Miocic when they run things back in Anaheim. It’s an interesting mindset considering Cormier knows how much a big loss can mess with a fighter’s head, as his two losses to Jon Jones did to him. However, Cormier said it simply comes down to “you get what you ask for.”

“You know, when I lost to Jones that second time, it could’ve been over,” Cormier said. “I was crying, I was done. He had broken me to a point where it was going to be very difficult to pick myself back up. And all the other stuff happened to where I was like, now you’re just kind of back and now you have to go defend this title like you’re supposed to. But the reality is, he just sat around.

“He didn’t go back and do what he was supposed to do. He was talking about me in a way that was just like, I annoy him and everything. So it’s like, you know what man, sometimes you get what you ask for. When you get it, and you really get it like he’s going to get it on Saturday, now you got to live with that. And it’s going to take a very tough man to bounce back from what I do to Stipe on Saturday night.“