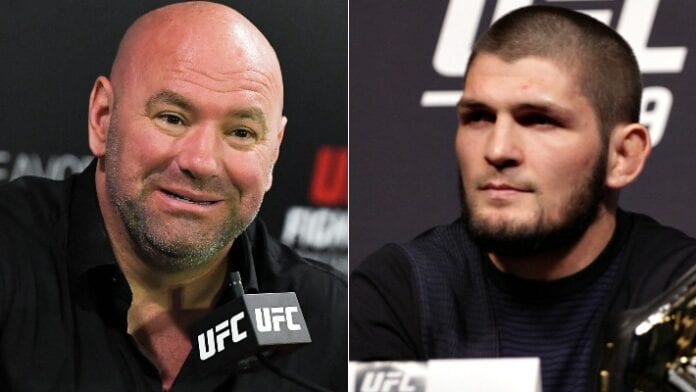 UFC President Dana White is still holding onto the hope that the undefeated Khabib Nurmagomedov will one day return to the Octagon. White will make his case once again when he attends dinner with “The Eagle” sometime this weekend to discuss his future in fighting.

Nurmagomedov is coming off an incredible triangle finish over hard-hitting contender Justin Gaethje which earned him ‘submission of the year’ honors. The Dagestani star would reveal the monumental event would be the last of his career, due to a promise kept with his mother after the passing of his father Abdulmanap.

Despite vowing to never fight again and retiring on top, the UFC president is not willing to part ways with Nurmagomedov just yet.

White has met with Khabib previously on Fight Island last January to convince him to stay, however nothing transpired as Khabib remains retired. Two months later, White told the media on Thursday that he will be having dinner with the UFC Lightweight Champion this weekend to further plot a plan of return.

“Let some of these fights play out to see who would fight next for the title,” White told Marc Raimondi. “I think if Khabib is interested, he’ll take the fight.”

White won’t give up as long as Nurmagomedov is willing to take meetings with him. His logic behind all of this? Khabib wouldn’t agree to meet with him if the star was dead-set on riding into the sunset. There may be a chance after all considering this.

Do you think Dana White will convince Khabib Nurmagomedov to make a comeback to MMA competition?