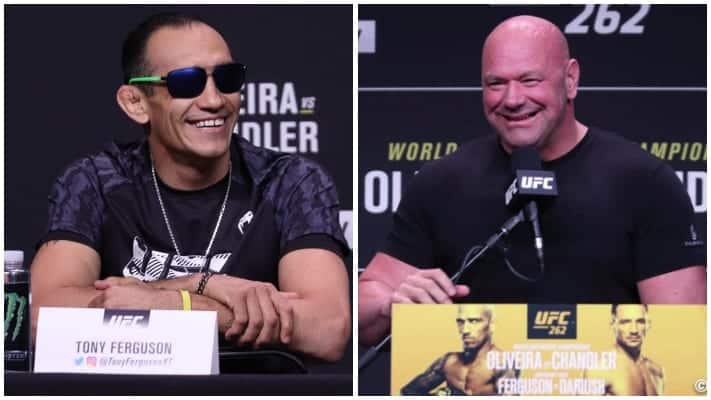 Ferguson took on Beneil Dariush in the UFC 262 co-main event on Saturday night in what was a must-win for him. However, it was virtually identical to his last fight as Dariush completely outgrappled him and even did some significant damage to his leg during a heel hook submission attempt.

In the end, Ferguson lost a unanimous decision with that making it three consecutive defeats for the former interim lightweight champion.

For many observers, this is the end of Ferguson at the highest level and White seems to agree.

“I hear you. He had a tough three rounds, he couldn’t stop the takedown, he couldn’t get up from underneath Beneil,” White said at the post-fight press conference. “Yeah, he had a tough night so I don’t know. We’ll see what happens.

“… Time gets us all. … Unfortunately, it’s definitely hit Tony.”

White did give credit to the toughness and heart Ferguson showed in his defeat, however.

“He’s tough as hell, though, man. He was in that heel hook and his ankle definitely popped. His ankle, the rest of the fight, looked like a golf ball. Maybe even a baseball and he kept fighting. There’s no quit in that dude. … He’s tough.”

Do you think this is the end for Ferguson at the highest level?