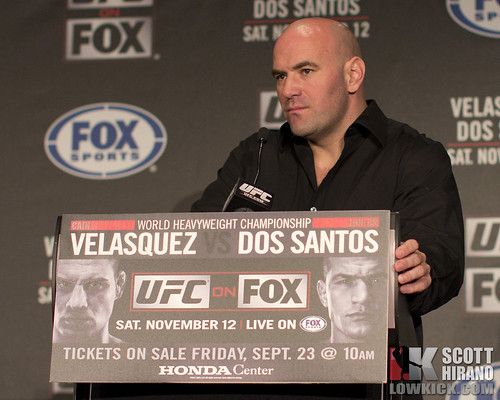 One thing that almost everyone in MMA can agree on is the fact that the refereeing and judging leaves a lot to be desired. The ten point must system that was adopted from the world of boxing just doesn’t seem to cut it in the world of MMA, but the solution to that problem doesn’t seem to be an easy one.  One of the ideas that has been floated is a point system based on half point increments and not full points.

When the system was mentioned to UFC president Dana White he didn’t seem to be too interested in adopting it, “We get into half-points? They better learn to count f—ing whole points before we get to half-points. You put a half-a-point in there, holy s—, every f—ing card will be destroyed. It’s a bigger problem than half-points. And I don’t want to smash these guys, they accepted what they did and they were stand-up about it, but Jesus Christ, there’s three f—ing numbers. There’s 10s and 9s. If you can’t count 10s and 9s, let’s not throw f—ing fractions in there.” – for more see MMAFighting

What do you think LowKick’ers, how can the scoring be fixed?