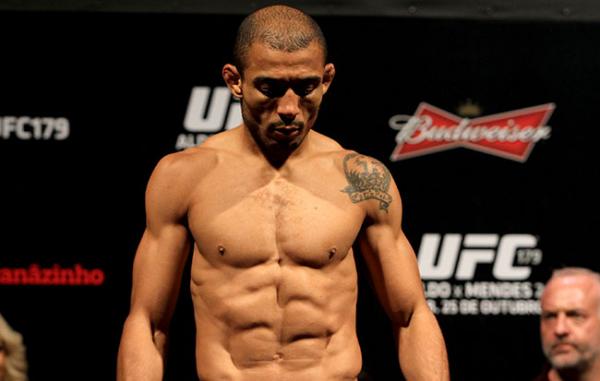 It’s been a crazy UFC 189 fight week, and UFC featherweight champion Jose Aldo will sit and watch as Conor McGregor and Chad Mendes collide for the interim belt. It’s been a bad month for the Nova Uniao boss, as he was forced out of the title fight with ‘The Notorious’ suffering from an injured rib. Multiple conflicting reports stated that Aldo’s rib was broken, while others claimed they were just bruised. An X-Ray apparently showing the champ’s ribs broken were later found to be from 2008, making the whole situation a little more confusing.

UFC president Dana White piped up and said that Aldo was in fact cleared to fight, and today furthered that statement at the UFC 189 Fan Q & A, saying that making weight was the main issue, as a direct result from a bruised rib:

“The big problem for Aldo in taking the fight wasn’t the fight, it was making weight. He had to cut something like 24 pounds. And if he couldn’t physically do it the way that he does it he was afraid he wouldn’t make the weight. That was really the issue. But he did not have a broken rib. It was bruised. And in the x-rays that went out was an old injury. When you saw that down on the bottom it was an old injury, not the new injury.

“It wasn’t UFC doctors (who cleared him), either. It was three different doctors.”

Finally clearing up a quite confounding mess, White’s comments aren’t meant to be close to the bone, but they seem somewhat cutting. Aldo’s health was apparently the promotion’s biggest concern, and he isn’t the only Nova Uniao product that cuts huge amounts of weight before fight night. Before his scheduled rematch with TJ Dillashaw, former bantamweight boss Renan Barao passed out without even making it to the scales.

Do you think Aldo should have fought on, having been cleared and all, especially given the $4 million check he would’ve got? With legacy and his title on the line, Aldo was faced with a tough decision the moment that rib got knocked, and ultimately his weight cutting concerns sealed the deal.