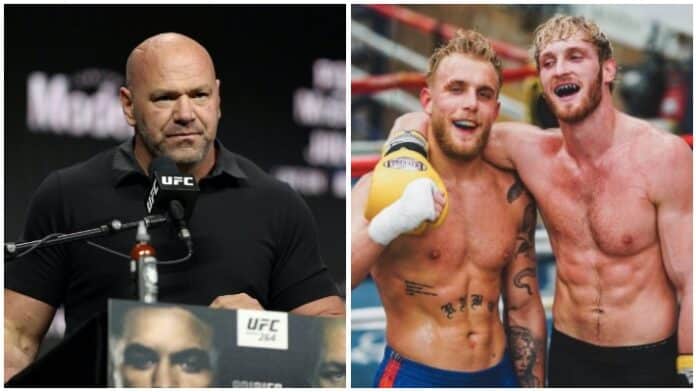 Dana White has finally explained why he gave Logan Paul and Jake Paul an upgrade at UFC 264.

The UFC president isn’t really a fan of the YouTuber’s turned boxers. So, it came as a surprise to everyone when Logan Paul revealed White called him ahead of UFC 264 to offer him and his brother the best tickets money could buy.

“So he calls me up and says ‘hey man, is this Logan’, and I’m like ‘yeah what’s up Dana’, and he explains that we’ve got two tickets, but he says he has better ones,” Paul said on his Impaulsive podcast.

“These seats are in what’s called ‘billionaire’s row’, and he says I’ll have a much better experience, and I’m like flabbergasted and honoured.

“Dana White is accommodating me, this is fantastic, and I’m like ‘sure’, I told him ‘thanks Dana,’ and I hung up and Jake is like ‘that was weird’.”

During a recent interview with The Nelk Boys, White explained the ticket upgrade was not due to any type of respect he held for the internet celebrities.

“He bought a bunch of tickets to the fight and the tickets he bought were not tickets he’d want to sit in,” White said “He was going to get smashed. So I put him over in another section.

“That was the only time we ever talked, was about the tickets.” (Transcribed by MMA Mania)

Jake Paul consistently attacks White in the public and has denounced the UFC boss on several occasions for what he perceives to be the mistreatment of fighters.

White has remained unfazed by the 24-year-old, although he did recently rule out ever working with Paul who he says has a short shelf life in combat sports.

Do you think Dana White made the right call by upgrading Logan Paul and Jake Paul’s tickets at UFC 264?