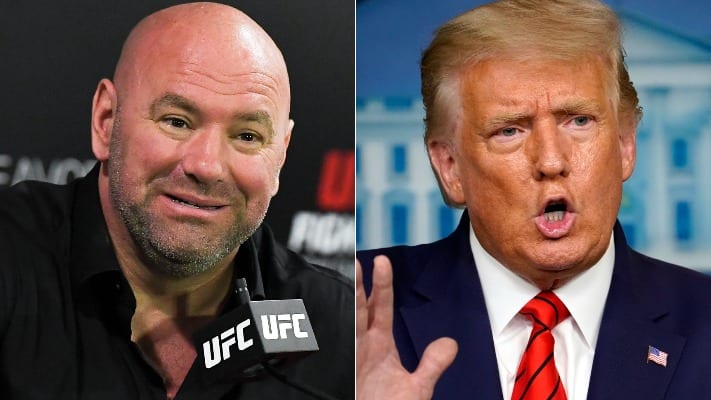 The relationship between White and Trump goes back to the early days of White’s ownership of the UFC. In the early 2000s, the then fledgling UFC struggled to find venues to host their events. It was Donald Trump who offered up his casinos to hold the fights, and a relationship between the two men was formed. The bond has stayed strong through the years, with White speaking at Trump rallies in both 2016 and 2020. The UFC boss has even connected Trump with fighters such as Henry Cejudo, Jorge Masvidal, Justin Gaethje and, perhaps most famously, Colby Covington.

Sitting down with former UFC fighter Mike Swick on his Real Quick podcast ahead of UFC 254, White was asked to elaborate on his relationship with Trump (H/T Essentially Sports).

“I’ve said it before and I’ll say it again, President Trump is an incredibly loyal friend. He’s been such a good guy to me for 20 years, I can’t even express to you what a good guy he’s been. When he gives you his word, it’s gold. He and I, actually since 2016, we’ve become better friends, since he’s become the president.”

White continued, “You see all this negative stuff about him and you have all these people right now who have their idea of who (President Trump) is. You’ve known me for a long time man. I don’t f**k around with people that aren’t good people and I don’t have time for that kind of stuff.”

White later went on to say that Trump is not only a supporter of the UFC, but also a fan of MMA and combat sports as a whole.

“He and I go to dinner and we argue over the best Rocky movie. I got Rocky three, he claims Rocky four.”

What do you think of the relationship between Dana White and Donald Trump? Let us know!