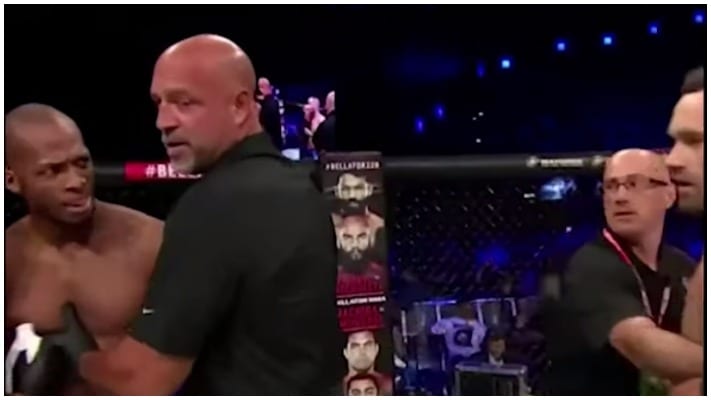 Referee Dan Miragliotta has no plans on officiating another Michael Page fight in the future.

Page got back to winning ways at Bellator Dublin on Friday when he knocked out Richard Kiely with a flying knee. However, “Venom” was taunting the Irishman throughout the fight and even after the win.

Miragliotta separated the two afterwards as a result. However, Page later told media that he got into a confrontation with the experienced referee, claiming he was called a “piece of sh*t.”

So what really happened? Miragliotta doesn’t deny that he cursed Page — however, it wasn’t to his face.

“I’m not going to say I didn’t say it, but I was wrong for saying it,” Miragliotta told MMA Fighting. “I shouldn’t have gotten that angry, but I did. I screwed up.”

Miragliotta claims he was trying to get Page to tone down the antics following the fight. However, Page didn’t take it too well:

“I go, ‘Bro, you are one of the most talented guys I’ve ever refereed,” Miragliotta explained. “I said, ‘Don’t ruin it with these antics. You beat the piss out of this guy, great job. You’re talented. You’re going places.’ He gave me a look like, ‘Screw you, f off.’

“… I was pissed, bro. I’m 56 years old. I’m a grown man. I’m older than him. I show respect to everybody. When someone says f*ck off like that to me with disrespect, I lost it. I never should have said what I said. And I know I was wrong. … Under my breath, I turned, and one of his coaches was right next to me, and I said, ‘What a f*cking piece of s*it.’ I knew I was wrong, and especially with it being his coach right there, and he said, ‘What did you say?’ And I said, ‘Man, I apologize. I never should have said that.'”

After everything that transpired, one thing is for sure — Miragliotta won’t be reffing any more Page fights:

“I’ll never do his fights again, because I can never really look at him and not have that animosity toward him, because I’m not going to let somebody tell me to f*ck off, and there’s nothing I can do, and I’m an official,” Miragliotta concluded. “It’s not good for me or the sport.”

This was backed by Michael Mazzulli, president of Mohegan Tribe Department of Athletic Regulation, who oversaw Bellator Dublin.

“When Mr. Page performs again, Dan will not be in the cage,” Mazzulli added.

What do you make of Miragliotta’s comments?