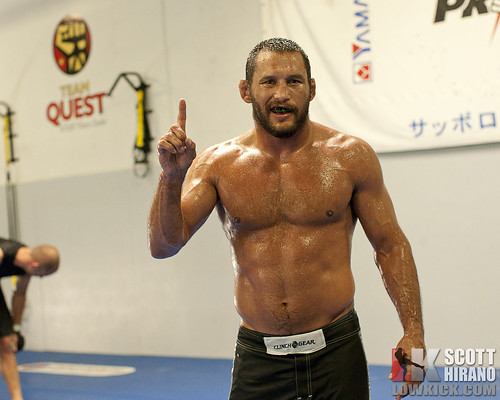 In November 2011 Dan Henderson returned to the UFC after spending some time in the Strikeforce organization. During his stay in Strikeforce he captured the organization’s Light Heavyweight title, defeating Rafael Cavalcante by TKO. He followed up that victory with another TKO win, stopping Fedor Emelianenko in the first round. When he stepped foot in the Octagon in November he and his opponent, Mauricio Rua delivered one of the best main events in UFC history going toe to toe for the full 25 minutes with Henderson eventually being declared the victor.

Now Henderson sits and waits with no opponent or fight on the horizon and that, according to Dana White, is Henderson’s doing. “He wants a title fight. He either wants Anderson Silva or whoever has the belt at 185 or the winner of Evans and Jones. Last time I talked to Henderson, he wanted to wait to fight one of these guys for the title.” White then continued, “He’ll fight whoever has that. Dan doesn’t seem too picky, I think he would fight Chael Sonnen.” – for more see MMAWeekly

What do you think LowKick’ers, is Henderson making the right decision in waiting?