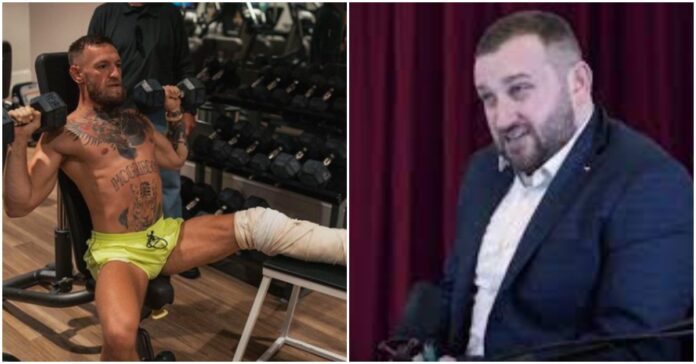 Conor McGregor will have to wait to roll into action against Al Foran after further delay of his celebrity wheelchair boxing match.

The matchup was supposed to go down in September, but McGregor’s recovery was not where he needed to be to compete. McGregor had broken his leg against Dustin Poirier in their 3rd fight.

It has only been 4 months since “The Notorious” snapped his leg inside the octagon. The fight would get McGregor back into action without him having to put any weight on his leg.

The fight will now be pushed back to March between the two. McGregor has recently been seen training for the fight and also starting to hit the mitts. McGregor was in good spirits when Foran was forced to delay.

“Due to time constraints the upcoming charity fight with Conor McGregor has been postponed until March folks, more time for @SirStevoTimothy to put on a show for the ages and more time for me to at least learn the basics of the sweet science.

“Someone is looking out for you up there Al haha. God bless lads, let me know when you guys are ready, I am here” McGregor replied to Foran on Twitter.

The boxing match is for charity as the profits of the match will go to the Irish Wheelchair Association.

Conor McGregor is looking to make his comeback inside the octagon by the middle of 2022.

He already has a few competitors licking at their chops to go toe to toe with him. Some names being Michael Chandler, Tony Ferguson, Rafael Dos-Anjos and a few others.

The former two division champ needs to get a win in his next fight. He has currently lost his last two fights, both being to Poirier. A win over any of those aforementioned fighters would put McGregor on the fast track to become a contender once again.

Are you excited to see Conor McGregor get back to action?