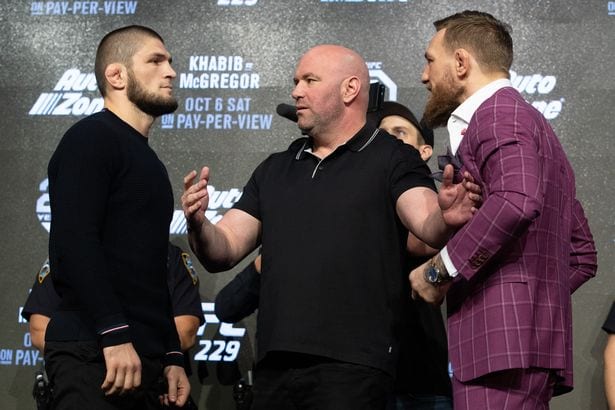 As usual, the Irishman held no punches at the UFC 229 press conference. McGregor dished political, crossed family lines, and got in Khabib’s face several times during the 30-minute presser. But did McGregor go too far when he verbally attacked Khabib’s father and coach Abdulmanap Nurmagomedov?

You may remember Abdulmanap was a subject of one of McGregor’s Instagram rants just about a week ago. McGregor continued to go after Abdulmanap’s character at the presser. He didn’t miss a beat when a media member asked if he was able to get a visa to attend UFC 229 in Las Vegas.

”I don’t know,” Khabib said. “Still working, but I think maybe no.”

Even with UFC President Dana White and United States President Donald Trump having a tight relationship its unlikely Abdulmanap will be able to secure a visa for October 6. Russian fighters have had a notoriously hard time securing visas in the past.

”Smell of shite off yer pa,” McGregor declared before going off on a rant that somewhat explains his earlier Instagram post.

Apparently, this whole thing boils down to a photo of Abdulmanap with the head of the Chechen Republic Ramzan Kadyrov. He is a controversial figure often referred to as a dictator and warlord. Kadyrov and his lieutenants have been accused of war crimes including most recently the rounding up and execution of gay men.

”The Chechen people know what I’m talking about when I called this man a coward,” McGregor said. “When I called his father a quivering coward. Him and Kadyrov were at a mosque together, and he posts a picture of Kadirov on his Instagram. Kadirov’s the Chechen dictator, a crazy man, don’t get me wrong. But, Khabib’s father, lick-ass O’Hoolihan, posts a picture of Kadirov at his mosque and the caption is, ‘Together we are stronger.’”

McGregor’s comments did not seem to phase the Dagestani fighter who glared straight through the dapper Irishman.