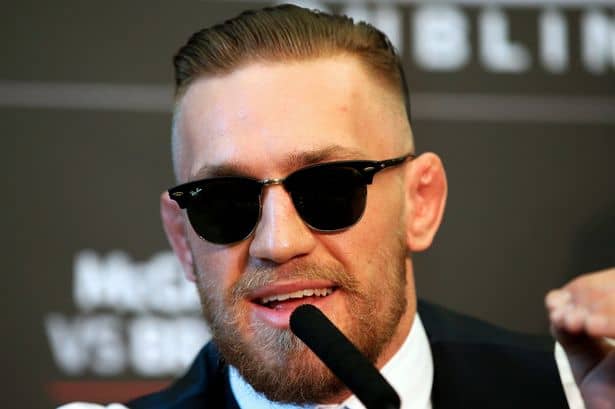 On what should have been the night of Jon Jones’ ninth title defense, the former light-heavyweight champion is confined to the fringes of the MMA world. In a highly controversial and somewhat tragic turn of event, ‘Bones’ became embroiled in a hit-and-run in New Mexico that marked the end of his illustrious stint as the consensus number one P4P (pound for pound) fighter on the planet.

Jones was stripped of his title, dropped by his main sponsor Reebok, and speculation swirled as to what could have possessed a man riding so high to stoop to such low levels. One fellow fighter who had a word of advice for Jones is UFC 189 title contender and featherweight phenomenon Conor McGregor. ‘The Notorious’ gave his two cents to media at an open workout this fight week, as transcribed by MMAFighting.com:

“I can’t understand it. Like, get a driver. Get driven. If I go out now, I’m driven in a limo. You know what I mean? You’ve got money. I don’t know. It’s just a weird situation. But I wish him well. I hope he gets his head together and comes back. He’s a great man, he’s a great champion.”

There’s no denying Jones’ legacy in the sport, even if he never competes again, although he has been guaranteed an immediate title shot should he return. He faces charges of felony hit and run after breaking a pregnant woman’s arm that fateful night, and the illicit items found in his car that night only add weight to his hefty charges. McGregor continued:

“Keep your team around you,” he said. “I’ve met Jon many times and I love Jon. He’s a great man. He’s a great fighter. But his decisions and his choices, I don’t understand how. You’ve got millions in the bank. How can you be in a little desert town in Albuquerque and be in a little rental Buick?”

“We had a good night, head home and now it’s done,” McGregor said. “Now that temptation is killed nice and early. If you let it build and build and build, then people start getting agitated and want to go out and do other stuff. And it leads into something bad. We killed it and now we are focusing in.”

As shocking as the recent events involving Jones have been, his failed UFC 182 drug test should have come as a warning. Unfortunately his one-night stint in rehab, that was little ore than a media show, could have been the biggest wasted chance of his storied career. Had ‘Bones’ actually sought the help he needed at that stage, this whole messy scenario could’ve been completely avoided. Hindsight is 20/20.

Jon Jones is built in to MMA and UFC history now, but it’s not for all the right reasons. He could well conquer the pack at light-heavyweight, or maybe even heavyweight one day, but a new era in his former division will start this evening. UFC 187 is a huge card, and has been eagerly anticipated for so long now, but I’d hazard a guess that Jones himself isn’t too pumped for the show.

Stay tuned to LowKickMMA for all your UFC 187 needs on fight day!