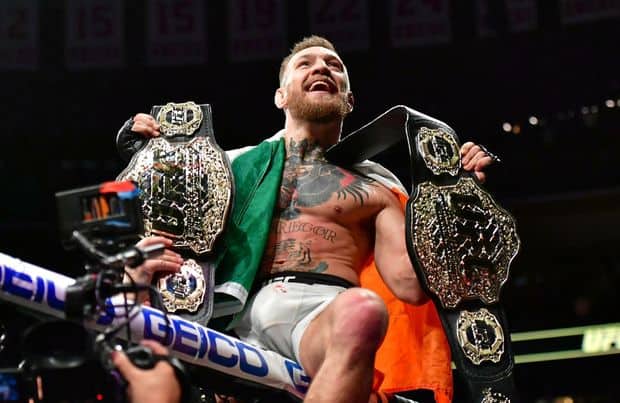 A few weeks ago, the UFC had announced that Conor McGregor had relinquished his featherweight title after also becoming the promotion’s lightweight champion with a brutal knockout victory over Eddie Alvarez at Nov. 12’s UFC 205 from New York. The Irishman has remained relatively quiet on the matter since, but he finally broke the ice last night (Dec. 17, 2016), saying that the UFC never contacted him regarding the situation:

In addition to saying that McGregor had relinquished his title, UFC President Dana White also said that the “Notorious” one would be taking 10 months off due to the fact that he and his longtime girlfriend Dee Devlin would be having a baby. Apparently, McGregor’s baby will be born later than he expected, leading the Irishman to wonder where White got the 10 month mark from:

According to McGregor, it seems as if there has been a lack of communication between him and the UFC, which was something he discussed after UFC 205. McGregor says that he is still waiting for his conversation with new owners WME-IMG:

“I just don’t know,” McGregor said. “I’m weighing up my options. But again, I expect that conversation. I expect them to fly that jet to me. Ari, Patrick, the new owners from WME-IMG, the guys that bought the UFC for $4 billion, I want to speak to them. I want to see what their plan is. Because right now I don’t know what nobody’s plan is.”

At the end of the day, however, McGregor isn’t worrying about what the promotion says or does. In his mind, he is a two-weight world champion:

“I’m still the two-weight world champion,” McGregor said. “Make no mistake about that. They can say what they want, they can try and get phony belts and hand them out to people I’ve already destroyed. I mean, the current champion (Jose Aldo) is a guy I KO’d in 13 seconds. The current interim champion (Max Holloway) is a guy I destroyed as well. … Officially, I don’t care what nobody says. I am the two-weight world champion and that is that.”

What do you make of McGregor’s comments?