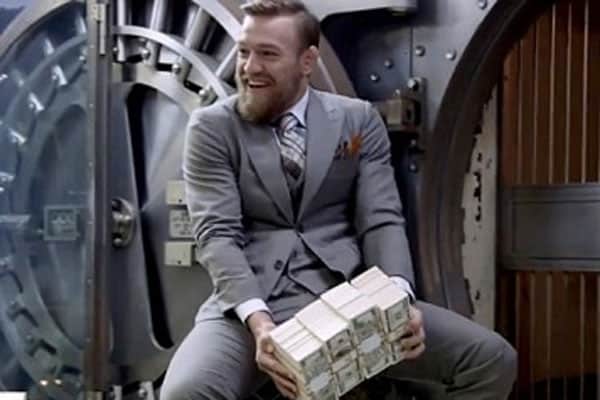 Dos Anjos took a rather calm stance at first, noting that he has to remain fixated on his fight with Cerrone in the main event of December 19’s UFC on FOX 17 from Orlando, Florida:

“Right now my focus is on Cerrone. If he wants to move up, I’m here. It’s gonna be easy money.”

But McGregor quickly turned the tide of the conversation by chiming in that dos Anjos would certainly take a fight with him instead of facing Cerrone:

‘That wasn’t the question bud. Ask yourself truthfully, if Dana rang you and said ‘you don’t have to fight Cerrone, you can fight McGregor,’ even though Cerrone was still field, would you take it? You’re damn right you would take it.”

Dos Anjos then agreed that he would, because it was an easy paycheck:

McGregor disagreed, however, suggesting that a bout with him would define his career in terms of attention, something that may be true. The Irishman took things to the next level with his creative smack talk, describing an entertaining situation of celebrating after agreeing to a bout with him:

McGregor had everyone rolling at that point, but dos Anjos did agree that McGregor could make him rich, especially when he beat him:

“Of course you can, I would beat you.”

A lot of things would have to fall into place for McGregor to actually face dos Anjos for the lightweight belt, yet it would be an amazing fight that would propel the lesser-known Brazilian champion to extreme prominence.

Would ‘The Notorious’ have a good shot at dethroning dos Anjos, or would the Brazilian’s stifling forward pressure be too much to deal with?