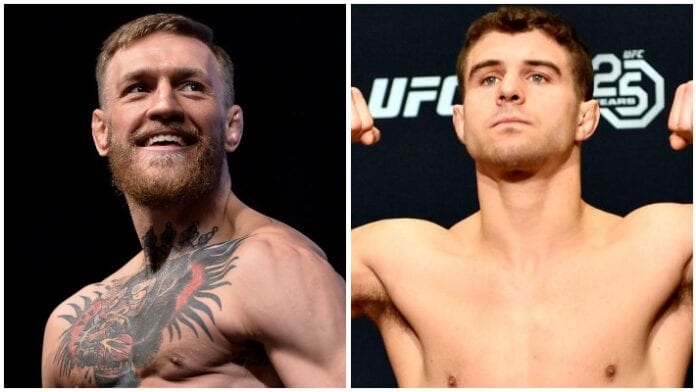 Conor McGregor has shockingly called for a fight with Al Iaquinta ahead of his headline bout opposite Dustin Poirier at UFC 257.

‘Raging Al’ is a strange call out considering he has lost three of his last four fights. The 33-year-old hasn’t fought since dropping to consecutive decision defeats against Dan Hooker and Donald Cerrone in 2019. Despite that, he remains in the UFC rankings and currently sits at #10 at lightweight.

McGregor and Poirier have been respectful of each other throughout the build-up to their rematch. It is a big change from when the pair first met at UFC 178 in 2014.

Iaquinta was vocal about not liking the budding friendship between McGregor and Poirier when the UFC 257 main event was booked. The outspoken New Yorker claimed Poirier had already lost the fight due to his attitude towards his opponent.

In a recent interview with Ariel Helwani, McGregor was asked about the differing build-up ahead of the rematch and Iaquinta’s past comments. ‘Notorious’ surprised the veteran reporter when he interrupted to call for a fight with Iaquinta.

It may seem a strange call out to many but McGregor insists wins and losses do not matter because he wants to fight everyone.

“I’d like to fight them all to be honest. I don’t care,” McGregor said. “This is the thing with me and all these other guys. Wins and losses and all this, it means nothing to me. If you’re scheduled to fight a man and you’ve gone through build-up and there’s history and all of this. A fight is a fight and fights must take place.”

‘Notorious’ later addressed why he and Poirier have been more respectful of each other ahead of UFC 257, he said.

“As far as this one being a lot more respectful. We’re more mature myself and Dustin. We’re both fathers and we have come through a lot. We are both engaged and make much philanthropic efforts. He is doing a great thing with The Good Fight Foundation. How could I not respect Dustin? One for that and two for how he handled the last loss. How he came back and rose up to become a champion. That’s admirable in my book and I’m very excited to get in an compete with him.”

Do you think Conor McGregor will ever fight Al Iaquinta?