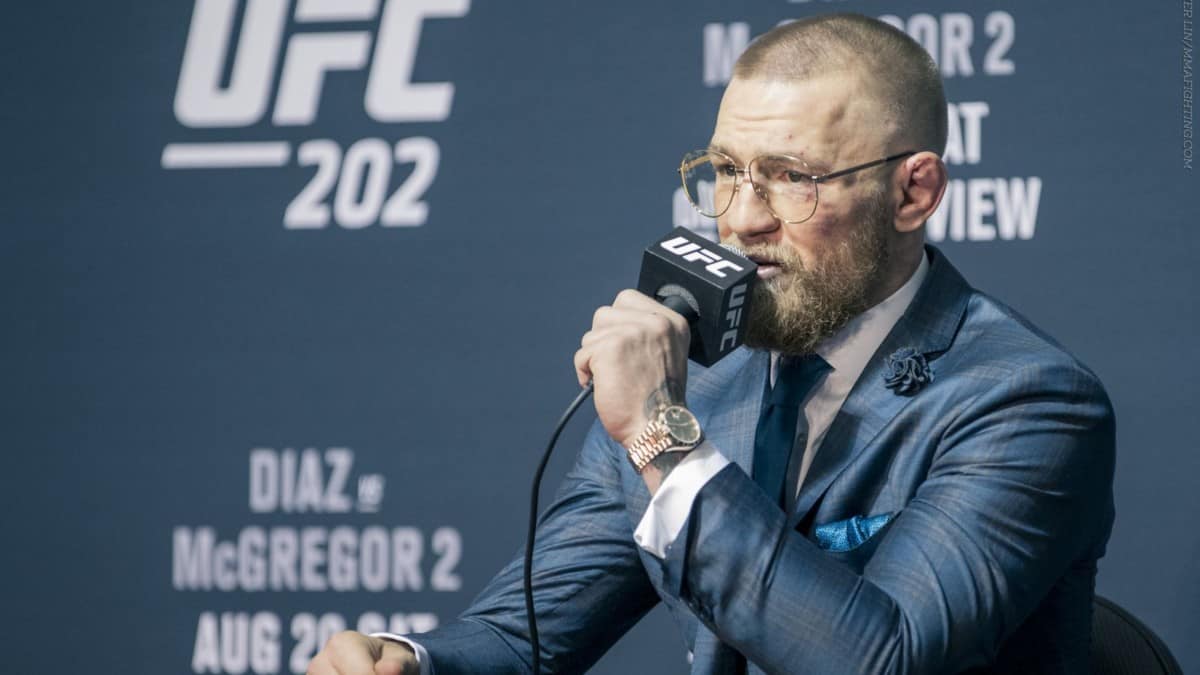 Hoping to see Conor McGregor back in the UFC soon? Dream on…

Since winning his second UFC title last November, Irish star Conor McGregor has started branching out. Arguably the biggest star in MMA history, ‘The Notorious’ has started thumbing pies left and right. After winning the UFC lightweight title, to add to the featherweight strap he’d claimed from Jose Aldo, McGregor announced a break from fighting. Almost right away the talk turned to a long-rumoured, but never credible boxing match against Floyd Mayweather. The modern pugilistic great entertained the idea, claiming he’d only come out of retirement to fight McGregor.

Once the social media war began, media and fans were more than sceptical about this rivalry. Then, out of the blue, UFC president Dana White gave the bout a realistic flavor. Offering both men $25 million to fight, White had given the bout a jolt of authenticity. Although Mayweather belittled the purse bid, McGregor’s acquisition of a boxing license in California. Given the already rampant fascination about boxing vs. MMA, McGregor vs. Mayweather is being talked about a whole lot. If yesterday’s pay-per-view interview with Ariel Helwani is anything to go by, ‘The Notorious’ isn’t coming back to the UFC any time soon:

Discussing his immediate plans during a sit down with Helwani, McGregor said it won’t be a return to the UFC that’s top of his priorities:

“I’ve got the reach. I’ve got youth. I’ve got the confidence. I’ve got the unpredictable style. You can’t prepare for a style like me. A guy said to me, why conquer one world when you can conquer two? So I’m going to go conquer two worlds. One-hundred percent,” McGregor said. “I believe the next time I step into a combat arena will be through the ropes wearing 10-ounce or eight-ounce gloves. I believe so.”

Further discussing the point, McGregor believes with the ALi Act, he’ll be able to box Floyd Mayweather without ramifications from the UFC. The Irish striker also says he is motivated by his doubters regarding this pairing:

“The sound of laughter and the sound of doubt motivates me. So I’m enjoying that. I seek that. I don’t feel that going to fight any of these other UFC bums right now. They need to rise up. Right now, they’re down there. I’ve got this situation where people are truly doubting me, like they doubted me at the very, very beginning, and that’s motivating for me. That’s what’s going to drive me to the gym when I need to go to the gym, and to put in that work to get that win. So that’s where we’re at right now.”

“With the Ali Act, I believe I can,” McGregor said. “Especially now that there’s offers on the table. But I think it’s smoother if we’re all involved. I think we’re all about good business. I’ve done great business with the UFC, with Dana (White), with everyone. I think it’s smoother if everyone just gets together and we get it involved. But again, everyone’s got to know their place.”

Mayweather, Not Ferguson or Khabib

“Everyone’s got to know their place,” McGregor reiterated. “There’s Mayweather Promotions, there’s the UFC, and now the newly formed McGregor Promotions, and we’re all in the mix. So that’s what I’m saying. Nobody is my boss. I know Floyd likes to say Dana (White) is my boss and this and he decides. Hell no. Nobody decides this. If they let people go fight jiu-jitsu tournaments, they can’t stop me going to fight a boxing fight. So obviously it’s smoother to do it all together, but look, everyone’s just got to know their place, and everyone does know their place. Low key, everyone knows their place, so we’ll figure it out.”

“(Mayweather) is the scared side, let’s be honest,” McGregor said. “He’s not trying to have a real fight. He needs rules to protect him. I don’t need rules. So he can say he’s this and he’s that, but in reality, he’s scared sh*tless. He is scared sh*itless. If I decide to just fight him straight-up – look, f*ck the UFC, f*ck MMA, f*ck boxing, f*ck sports fighting. Let’s just say we fight. It’d be the easiest fight ever.”

“I’m twitching (from inactivity) sometimes, but f*ck it, this is historic. Fighting Khabib what-the-f*ck-his-name-is, Tony Donkey, Jose, even Woodley for the third (title), it’s not this. Sometimes you’ve got to be patient with situations, and I feel this is one of them. Plus, the situation around me, Dee’s about to have a baby, I’m looking forward to that. I’m in a different mindset right now, so I’m happy. Everything seems to just be working perfectly for me, so a little bit of wait is not too bad. I’m okay with it this time, for now.”