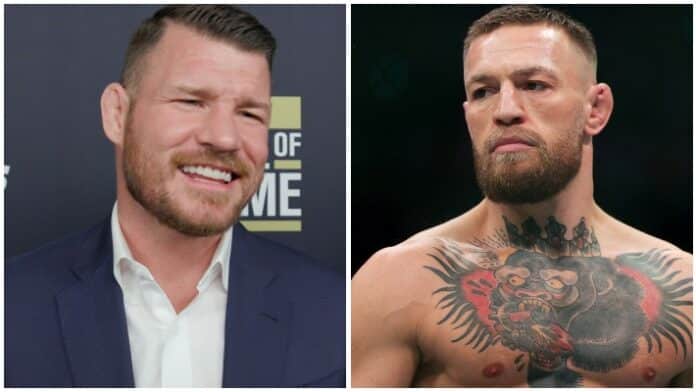 The ongoing social media beef between Conor McGregor and Michael Bisping has got personal.

Bisping put himself in McGregor’s firing line last week when he chimed in on the Irishman’s attacks on Daniel Cormier. The former middleweight champion claimed Cormier would pull McGregor “limb from limb” in a fight.

‘Notorious’ got wind of the comment and subsequently labeled Bisping “a nobody”. The former dual-weight UFC champion also claimed he made commission every time Bisping fought.

On the latest episode of his podcast, Bisping denied McGregor made any money from his fights and also joked, “I don’t know what’s disappearing quicker, Conor’s tweets or his legacy.”

“The only legacy I give a f*ck about is the Legacy 5000 my mother flies around on,” McGregor wrote in response to Bisping’s comments.

“Money doesn’t make you a man little guy. Besides, even if you stood on your wallet I’d still be a bigger man than you,” Bisping replied.

McGregor then got personal, claiming he knew the real reason Bisping no longer lives in England, he wrote.

“Oh you a big man are ya bro ahahah a real man wouldn’t sprint from his hometown after they come knocking on his mother’s door bro. Don’t forget that one big man in the U.S. Crunch time and you dipped.”

“I’m not your bro,” Bisping replied ignoring the personal attack.

What do you make of this latest exchange between Conor McGregor and Michael Bisping?