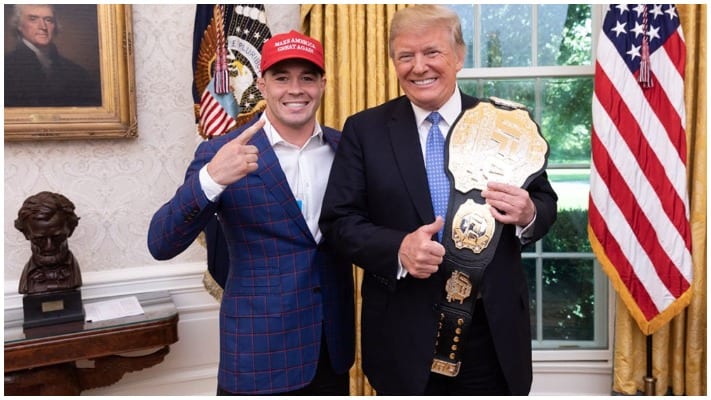 UFC welterweight contender Colby Covington has sent a thank you message to Donald Trump who finished his four-year stint as the American president on Wednesday.

“Thank you for always being the champion the people of America need Mr. President! God bless you and the entire Trump Family for always putting America First!,” Covington wrote.

Covington has been a very visible and vocal Trump supporter for some time now. He is usually sporting a MAGA hat and played a role in the former president’s failed bid to retain office in 2020.

Following his capture of the interim welterweight crown opposite former lightweight gold holder, Rafael dos Anjos back at UFC 225 in June of 2018 – Covington visited The White House with his interim crown upon invitation by president, Trump.

Prior to his most recent win over Tyron Woodley ‘Chaos’ was sitting front row at a Trump rally in Nevada where he met with the President. Post-fight he received a call from Trump and later sat front row again alongside the President’s family and advisors as he debated Joe Biden for the first time.

Covington is currently being linked to a fight with fellow Trump supporter and former friend, Jorge Masvidal. The pair previously trained together for many years at ATT but the relationship soured and Covington has since branched out on his own.

‘Chaos’ has been publicly pursuing the fight for some time and is now waiting on Masvidal to sign the contract to make this match-up official. As of right now, ‘Gamebred’ has failed to commit to the fight, negotiations between the BMF champion and the UFC continue.

Do you think Colby Covington & Jorge Masvidal will fight in 2021?