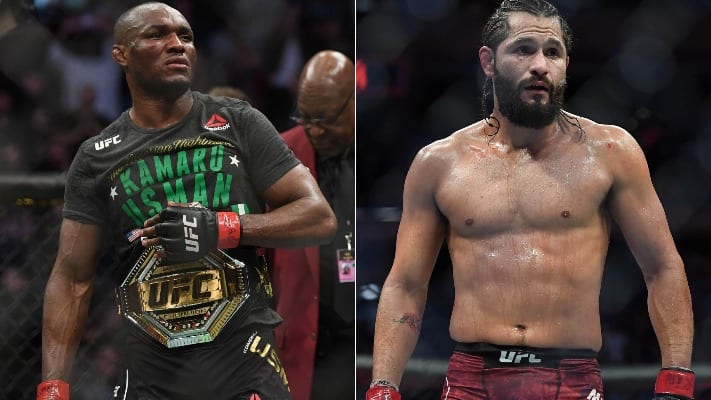 Colby Covington isn’t too sure that Kamaru Usman vs. Jorge Masvidal will actually happen, but if it does, he’s picking Usman to “expose” Masvidal.

Covington and Masvidal used to be roommates and friends, however, their relationship turned sour after the pair entered the 170-pound title picture. After months of trash-talking, Masvidal has found himself in a position to challenge Kamaru Usman for the welterweight title next. “Gamebred” comes off of a Fighter Of The Year campaign in 2019, clocking in three stoppage wins and a BMF Title win.

Now, UFC president Dana White is looking to book the UFC’s latest rising star against Usman during International Fight Week in July for the title. Of course, there’s still chatter that Masvidal is trying to hold out for a fight with Conor McGregor, as he’d like to make the biggest paycheck possible next. Usman comes off of a successful title defense in December, where he finished Covington in the fifth round of their UFC 245 headliner.

“The Nigerian Nightmare” broke Covington’s jaw midway through the fight before putting him away late in the final round. Now, Covington, who was upset with the stoppage by referee Marc Goddard, is calling for an immediate rematch given how back-and-forth the fight was up until the finish. Speaking to MMA Junkie recently, however, Covington was asked for his opinion on a fight between Masvidal and Usman.

If the fight does happen, Covington said he’s picking Usman to “expose” his former friend and training partner, Masvidal.

“If they fight, I think that ‘Marty Fakenewsman’ exposes journeyman Jorge Masvidal,” Covington said. “Like I said before, ‘Street Judas’ Masvidal, he hit lightning in a bottle. He’s not that good of a fighter. He’s got three fights in a row where he got three lucky knockout finishes, but who’s he beat?

Should the fight between Usman and Masvidal happen next, Covington is willing to sit out and wait to fight the winner. Either way, Covington sees the situation as a win-win, as he can sell a fight with either Usman or Masvidal.

“It would suck, but it would also be good,” Covington said. “There’s really nothing bad that can come out of that fight. Whoever wins that fight, it’s going to be a massive fight. It’s either going to be my ex-best friend journeyman Jorge Masvidal, aka ‘Street Judas’ because he’s a turner, he’s a piece of (expletive) traitor, and if we fight, there’s such a history, man.

“We used to be best friends, we lived together for what, a year-and-a-half and trained together for eight years, every single day. Me and Jorge used to fight in apartments for two hours straight, fight in bathrooms, fight in parking lots, like to fight for a lot of money on the line. It would be easy to do, and it’s a real rivalry now.

“This is a heated rivalry. We want to kill each other, and there’s only one guy that’s going to get killed, and that’s him because he has no chance against me, but we’ll just have to see.”

What do you think about Covington saying he thinks Usman will “expose” Masvidal in a potential fight?