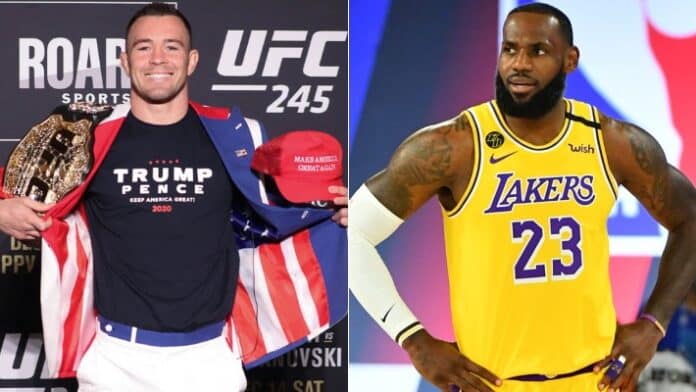 Colby Covington is once against letting his disdain for NBA superstar LeBron James be known.

The former interim UFC welterweight champion has a history of criticizing the future basketball Hall-of-Famer. Covington and James are at the opposite ends of the political spectrum, with ‘Chaos’ supporting the MAGA movement, while the Lakers star has been an advocate for Black Lives Matter.

In an interview with The Daily Wire, Covington took aim at James and the NBA as a whole for their backing of BLM and other progressive causes (H/T Sportskeeda).

“Where’s the justice in critiquing the greatest country in God’s green earth, America,” he continued. “Not talking about Hong Kong, not talking about the Uyghurs in China. He’s staying silent on everything in China because he’s a Chinese puppet master.”

Covington also took aim at James’ charities and humanitarian work; most notably, the I Promise School, an academy James opened to help serve underprivileged students in his hometown of Akron, Ohio.

Covington claims that the school and James’ other charities are merely just loopholes to get away with paying fewer taxes.

“I know first-hand when you’re making a lot of money, you need tax write-offs,” Covington said. “These schools, these charities, yeah he wants to look like a good guy on camera like he’s doing good for the people. This is a tax write-off for his billion-dollar business. He needs this so he can keep all his cash in the bank.”

While Covington continues to take time to criticize James, he would probably be best served focusing on his next fight. The UFC recently announced that he will get a rematch against Kamaru Usman for the welterweight championship at UFC 268.

Do you agree or disagree with what Colby Covington said about LeBron James? Let us know!