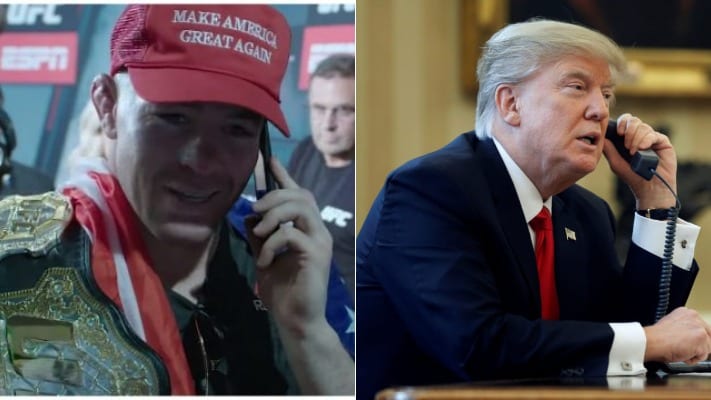 Colby Covington is one of the most controversial stars in mixed martial arts (MMA) today.

A lot of that has to do with his very open support for current United States President Donald Trump. Covington was the first fighter to visit the White House after winning UFC gold last year. It was there that he developed a relationship with Trump, who called Covington to congratulate him this past weekend after his victory over Robbie Lawler.

However, despite his staunch support for the President, it turns out Covington didn’t actually vote for Trump in the 2016 election. MMA reporter Jeremy Botter checked voter registration records in the states where Covington has lived, and realized Covington was not registered to vote in 2016.

In short, Covington didn’t vote for anyone. Responding in a statement to Botter, Covington admitted he has never registered to vote in his life, as he has always been skeptical of all politicians before Trump.

“Well I’ll be damned. Finally we have a story that isn’t fake news. You are correct. I have never registered to vote in my life.

“I have hated politics and politicians for as long as I can remember. I have always found them to be liars and hypocrites, seeking nothing but to further their self interests in the name of public service.

“I openly admit that I felt the same way going into the 2016 election. While I was certain that Hillary was a fraud, I was likewise skeptical of now President Trump and the promises he was making. How could I not be, especially in light of the media‘s portrayal of him and his agenda?

“No, I did not register to vote in 2016 or any election prior to that. I did not trust President Trump at the time and have never been a fan of members of either side of the aisle.

“And then it happened. Against all odds and with just about about every card in the deck stacked against him, including many uncooperative members of his own party, the guy started delivering on his promises. He began to make America great again.

“I am blown away at the success he has had in the short time he has been in office. I shudder to think of just how far along we would be if he was treated even close to fairly by the media and the occupants of the swamp in Washington D.C.

“I began to support our President when I realized he was a true man of the people, looking to make our country great for all of us instead of using the office for his personal gain. The support is growing stronger by the day as he continues to deliver on his promises.

“I will be registering to vote in the 2020 election and do my part to ensure this man finishes the job he has started. “

What do you think about Covington admitting he didn’t vote for Trump in the 2016 election?