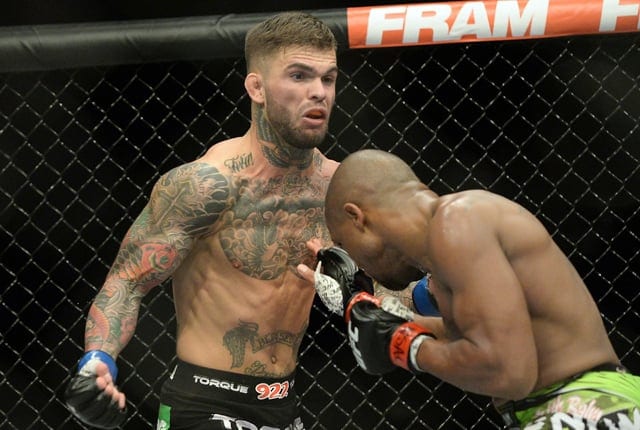 Cody “No Love” Garbrandt established himself as a force to be reckoned with in the intriguing 135-pound division with a breath taking first round knockout of the previously surging Thomas Almeida in the main event of last weekend’s (May 29, 2016) UFC Fight Night 88 from Las Vegas, Nevada.

In the aftermath of such an emphatic victory, Garbrandt knows exactly what he wants next: a title eliminator bout with Bryan Caraway at September 10’s UFC 203 from his home of Ohio:

“Going into the fight with Thomas Almeida, Aljamain Sterling and Bryan Caraway were match up, too. And they were talking about the winners facing each other. And I have no doubt in my mind that if Aljamain had won, we’d be fighting. Bryan won, so why shouldn’t I be fighting Bryan for the next in line for a title shot or that ranking up there. I think I just got ranked fifth, he’s fourth. So let’s fight on September 10. I’ve seen him do some bantering in the media about how I do not deserve to be ahead of him. But my win was dominant with no questions.” Garbrandt told Ariel Helwani on a recent edition of The MMA Hour.

“No Love”, however, feels as if his victory over Almeida was more impressive, and would like to test his hands on the jaw of “Kid Lightning”:

“You had a close fight with Aljamain and I went in there and destroyed my adversary in under three minutes who was looked at as untouchable and unbeatable. So I deserve to not only have the title shot in front of him, but he says he has the strongest jaw, a good chin. He credits himself with having the best jaw and chin in the UFC division, well, I have the heaviest hands in my division. I’m the hardest punchers, the fastest, so why don’t we put those to the test? No disrespect, but let’s fight September 10 in Cleveland at the Q for the number one contender’s spot.”

The fight sure seems to make sense given the current landscape of the division, as well as from a rankings standpoint.

Who would you pick to come out victorious if these two end up throwing down?