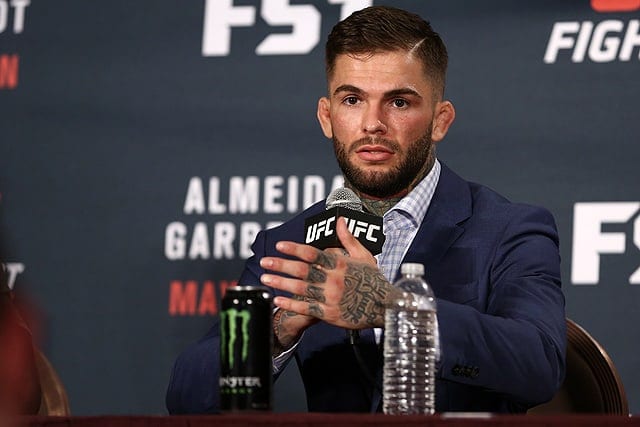 He may have a pivotal championship rematch with TJ Dillashaw at this weekend’s (Sat., August 4, 2018), but much of the focus on Cody Garbrandt in the lead-up to the fight has been fixated on some old tweets he sent using some controversial language.

The social media posts from 2012-2013 surfaced online depicting several instances where Garbrandt had used a version of an offensive racial slur, inciting the obvious social media backlash from what was most likelly several angles.

Check out the tweets and judge for yourself:

Cody Garbrandt might want to delete some of his old tweets. #UFC227 pic.twitter.com/pEqZhlJAaS

Garbrandt briefly reacted to the issue by saying he had sent the tweets ‘when he was a teenager’ despite the timeline clearly dictating that he was 21 or 22 years old at yesterday’s UFC 227 open workouts, saying he ‘wouldn’t even address that’:

“I won’t even address that. That was when I was a teenager,” Garbrandt responded. “Anyway, next question.”

But when the topic resurfaced as expected during today’s UFC 227 media day, Garbrandt became more vocal on the subject. Speaking out in an interview with MMAjunkie, Garbrandt said that what he posted years ago wasn’t actually something to be embarrassed about:

“First and foremost, it shouldn’t be embarrasing,” Garbrandt told MMAjunkie’s John Morgan on Thursday. “I’m going to be a man and address it once, and that’s it.”

“No Love” explained that the words he tweeted were simply lyrics from a song of his past, focusing on his view that he had grown up with people of all cultures and races so it was normal at that time. Now, he said it was a learning experience:

“It’s lyrics,” Garbrandt said. “I grew up hanging out with blacks, Puerto Ricans, Mexicans, selling drugs. That’s a street word we would always say. It wasn’t like I was using derogatory words toward anyone. That’s how we grew up. It was kind of normal. That’s it. It’s a learning experience for a lot of people to not use that word in this day an age.”

While many will still deride the former bantamweight champion for his choice of words in such a public forum online, Garbrandt appeared a bit perturbed by the amount of attention being paid to tweets he sent so long ago. It became so much so that “No Love” asserted his focus was on nothing but the fight as people tried to bring him down, and even ended the interview to avoid further discussing the issue:

“Everyone’s just trying to figure out some negativity,” he said. “I’m so positive, and I have great things going on this week. Nothing’s deterring me from my focus. That’s that. It’s the last time I’ll address this question. And I’m actually done with this interview with you, as well.”