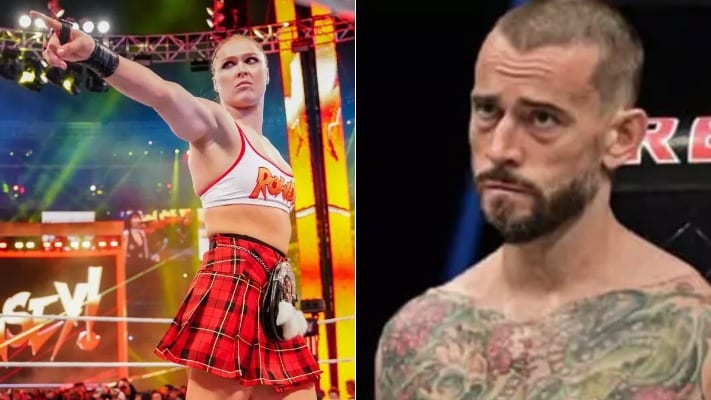 CM Punk was a fan of Ronda Rousey’s controversial comments.

Rousey made headlines recently when she not only slammed WWE’s “ungrateful” fans, but also labeled pro wrestling as “fake fights for fun.” Those comments received plenty of backlash especially from many within the industry with “Rowdy” later doubling down on her comments.

Many were interested to hear what Punk had to say about them as like Rousey, he too, has experienced both the world of pro wrestling and real fighting.

The former WWE champion is certainly enjoying the whole situation but did note where Rousey could be in a trouble with her statements.

“She [Rousey]’s doing her job. I love this,” Punk said on WWE Backstage (via Cageside Seats). “This is pure chaos and I don’t see this ending well, whether it’s real or scripted, but it’s going to be fun to watch. It’s fantastic to watch everyone bite on it and get butthurt. Everyone says ‘Ronda is soft’ because she got knocked out twice. ‘She’s not a real fighter. She’s not a real wrestler.’ She’s got them wrapped around her finger. Wrestling is best when you blur the lines. ‘These two really don’t like each other. She just punched her in the face.’

“Where I think she’s going to get in trouble is when she says ‘I’m real, everything else is phony,’ you’re not on thin ice anymore, you’ve fallen through the ice and you’re in the water. It’s going to be interesting to see how they tiptoe around that.”

Rousey has not competed in the WWE since last year and doesn’t appear to be heading back anytime soon. If she continues with her recent comments, it doesn’t look like Vince McMahon and company will want her back either at this rate.

What do you make of Punk’s response?