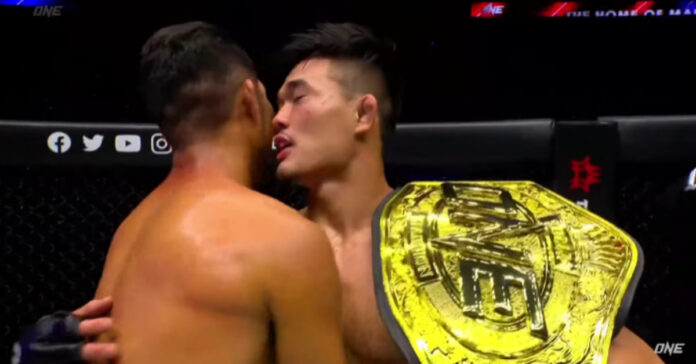 After a controversial decision that crowned Ok Rae Yoon the ONE lightweight world champion just under a year ago, Christian Lee recaptured the lightweight title in an incredibly dominant performance on Friday at ONE 160.

‘The Warrior’ had every intention of keeping it out of the hands of the judges. Hot out of the gate, Lee immediately put pressure on the South Korean champion. Ok had his moments early on, but Lee was proving to be the much faster and more powerful striker. Near the two-minute mark of the first round, Lee landed a solid left hook followed by a partially blocked right head kick forcing the champion to retreat. Following Ok to the fence, Lee looked to take advantage, but the South Korean was able to circle out and get himself back to the center.

Continuing to bring the pressure, Christian Lee landed an overhand right followed by a 1-2 combination that dropped Ok near the fence. Following him to the ground, Lee delivered vicious knees to the head of the champion. Ok was able to get back to his feet and create separation until Lee dropped him again with another devastating overhand right. Ok again recovered and backpedaled, his only goal being to survive the opening five minutes.

Coming out for the second round, Ok Rae Yoon was wearing the damage from the first. Intent on adding to the damage, Christian Lee picked up right where he left off, bringing pressure to the defending champion. Less than a minute into the round, Lee delivered a superman punch-calf kick combination that backed Ok to the fence once again. From there, ‘The Warrior’ once again landed the overhand right, dropping Ok to the mat. Pinning the South Korean to the fence, Lee threw a series of brutal knees to the head of the champion.

With no response from Ok, the referee had no choice, but to step in and call a stop to the action just one minute into the second round. Christian Lee had recaptured the ONE lightweight world championship in an absolutely dominant performance.

During the post-fight interview, Christian Lee discussed his first meeting with Ok Rae Yoon nearly a year ago and the changes he made heading into the main event rematch.

“The biggest mistake I made in the previous fight is when I get into the Circle, I just want to fight. And so I calmed it down a little bit. We laid out a game plan, I stuck to it, I just tried my best to take my shots. Take what was there, not rush anything. And the finish happened on its own.

“The confidence comes from all the hard work. There’s no way to fake it in this game. I said it in the last fight. I thought I won it. At 50%. This is my performance at 100%. Ok Rae Yoon is without a doubt one of the top lightweight fighters in the world. So respect to him. But I knew this is how it’s gonna go down tonight. I knew that the training ang hard work that I put in was going to be enough to get it done. And here I am, I’m happy to be with my baby girls.”

For his performance, Christian Lee was rewarded with a $50,000 bonus. While Lee’s sister Angela Lee, the ONE atomweight world champion was not present at ONE 160, Lee was joined by his wife and daughter inside the ONE Circle to celebrate his new reign as a ONE world champion.