LowKickMMA.com
Home MMA Gyms Chimaev extends an offer to Kevin Holland to join his gym after... 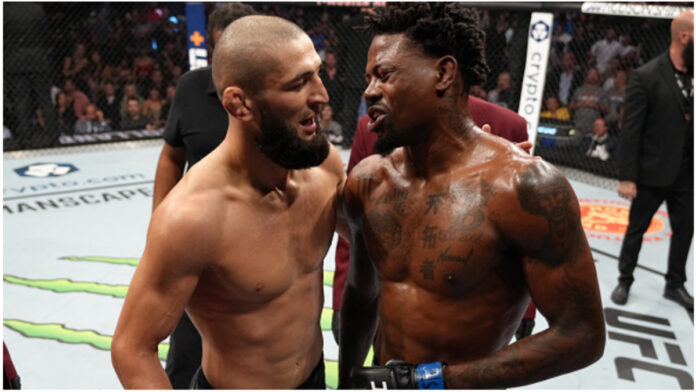 After a short and furious battle with Kevin Holland after a newfound beef in the leadup of UFC 279, Khamzat Chimaev has extended the olive branch to his former opponent. Saying in the post-fight presser that he would welcome ‘Trailblazer’ to train with his team in Sweden.

While fans may have expected UFC 279 and its fight week to be entertaining, nobody could have guessed that things would be as insane as they were. It all started with the UFC 279 press conference, where a near riot broke out backstage between the parties of Kevin Holland’s, Khamzat Chimaev’s, and Nate Diaz’s entourages.

Things would eventually be settled with no significant issues or injuries reported, but the press conference would indeed have to be canceled in a historical first for the UFC.

Surprisingly though, this would just be the tip of the iceberg. As next would be the weigh-ins, and no fan alive could have predicted what would happen next. In a shocking turn of events, Chimaev would miss weight by an astounding 8.5lbs, sending the entire event into a catastrophic whirlwind.

The UFC rushed to fix the new mess that had been created as Nate Diaz would no longer fight ‘Borz’ with the weight miss. So, fights would be shuffled and fans would be blessed with a card that ultimately was a consensus better than the original one. Diaz was now set to face Tony Ferguson in the main event, and Chimaev and Holland would get a chance to settle their newfound beef.

It took only a few minutes for ‘Borz’ to accomplish his goal. Literally, rag-dolling Kevin Holland like he was a puppet. Chimaev had his way with the UFC star and found a home for a D’arce choke that forced the tap.

After the fight, you could feel it in the air that tensions had eased. From being involved in a near-riot that started with Chimaev and Holland at its core, to now finding some newfound respect for one another.

At the UFC’s postfight press conference, Chimaev had this to say about things:

“He’s actually a nice guy, so I like him, you know?” He began. “Sometimes we don’t like each other before the fight, it’s all normal…we’re coming for the war, to kill each other.”

“So, now this war is over,” Khamzat Chimaev continued. “If he wants he can come to my gym and be one of us…and he’s nice guy, good guy, tough guy, you know? He has a lot of things to learn, so yeah, he’s one of the warriors.”

With the war over and an olive branch extended, do you think Kevin Holland will accept Chimaev’s offer to train in Sweden?