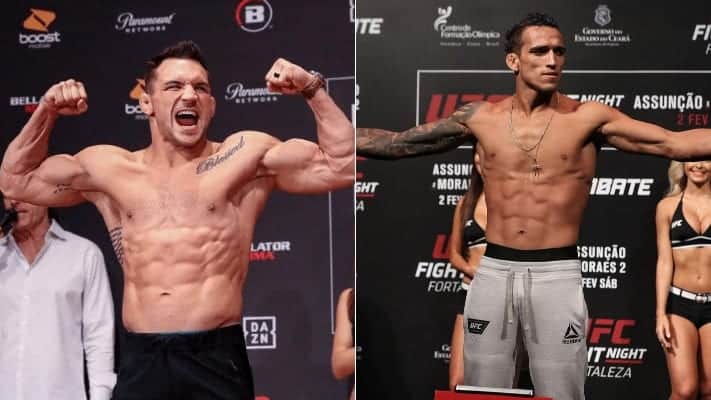 Just moments after it was announced UFC Lightweight champion Khabib Nurmagomedov would be officially retiring, two top contenders have been attached to a title fight set for UFC 262 on May 15.

According to ESPN’s Brett Okamoto, top lightweight contenders Charles Oliveira and Michael Chandler will face off for the now vacant title.

Hot off his performance of the night warranting debut against Dan Hooker, Chandler gets his first title shot in the UFC in just his second fight for the organization.

Taking on the challenge is UFC veteran Charles Oliveira, who since moving to the Lightweight division has been on a tear accumulating an eight-fight winning streak most recently defeating former interim champion Tony Ferguson.

According to reports, the UFC attempted to make this booking for February this year at UFC 258, however, Oliveira turned down the fight stating that he would only like to fight for a title.

With these two paired it is likely the UFC will soon announce a trilogy fight between Conor McGregor and Dustin Poirier. Currently, there has been no official report of this matchup, however, both fighters have expressed that it’s the fight they would like next.

As it stands Khabib has not yet been removed from the lightweight or pound-for-pound rankings, however, that change will likely take place in the near future.

The May PPV card UFC 262 is also rumored to be the possible host for a Bantamweight title rematch between champion Aljamain Sterling and former champion Petr Yan.

Who do you think leaves with the title in hand?