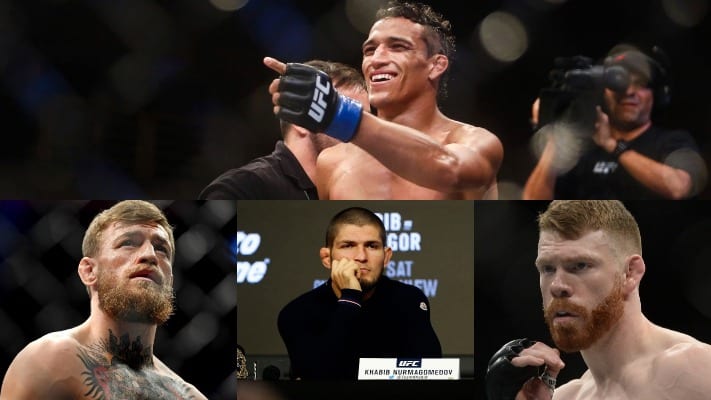 Oliveira made it two knockout wins in a row in 2019 following his first-round finish of Jared Gordon on the main card of UFC Sao Paulo on Saturday night.

It took his winning streak to six with all of those victories coming by way of finish. Ranked No. 13 in the UFC lightweight rankings, “Do Bronx” now wants a higher-ranked opponent.

He called out Conor McGregor and Paul Felder in his post-fight interview and expanded further during the post-fight press conference:

“I came here to fight, and now, I’m calling out some names,” Oliveira said (via MMA Fighting). “My coach is going to see what’s best. I want to fight on the last card of the year. I didn’t [take] any punches. I’m 100 percent. It can be Conor McGregor, (or) it could be Paul Felder.”

McGregor, of course, is the biggest name in the division. Felder, meanwhile, is ranked No. 6 and is notably the last opponent to inflict defeat on Oliveira.

However, the Brazilian went a step further by stating that he’s a bad matchup for current champion Khabib Nurmagomedov:

“Everyone’s talking about Khabib,” Oliveira added. “I’m better than him standing up. If it goes to the ground, I’m not going to be afraid of him.”

What do you think of Oliveira’s callouts?