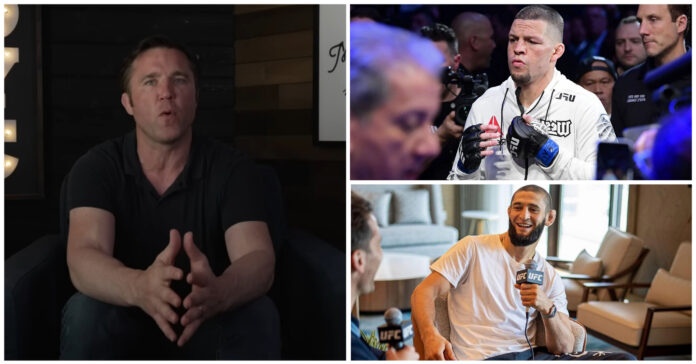 Fan-favorite Nate Diaz has been on the sidelines since his latest outing with Leon Edwards in June 2021. The Stockton native seems to have locked horns with the UFC regarding his next opponent and stated that he has been put on ice. After it was revealed that Diaz is on the last fight of his current contract, there was speculation that the promotion might be saving him for the return of Conor McGregor.

“The Bad Guy” claims that Diaz will return to action sooner than later.

In a recent episode uploaded to his YouTube channel, Chael Sonnen shared the inside scoop he has on Nate Diaz.

“I got a little inside scoop for you guys, which is Diaz has accepted a fight,” Sonnen said. “Diaz has a fight coming up. I gotta stop right there. I don’t know who the opponent is, and I’m not holding that from you. We know that Chimaev and Nate have been associated together for a period of time.”

While Sonnen didn’t confirm the opponent, he talked about what a potential matchup with Khamzat Chimaev would look like, and more importantly, if it’ll get the rising “Borz” any closer to a shot at the gold.

“Can Chimaev have a number one contender’s fight going into that match or does he need somebody more along the lines of Belal Muhammad, who is the opponent that I think most of us guessed,” he said.

“I’m not announcing for you guys that it’s Diaz vs. Chimaev. I’m sharing some inside scoop, Diaz has a fight. That I’m sharing with you guys. Is it Chimaev? And if it is Chimaev, does that make it a number one contender’s fight?”

“I will be interested when I do get the rest of this story, the Nate Diaz piece. Who Nate is preparing for is interesting because if that goes to Chimaev, then you got a big question, what’s next for Belal?“

Sean Brady is next for Belal Muhammad.

Although Muhammad and Chimaev agreed online to a bout on the Abu Dhabi card in October, the UFC booked Muhammad up against another rising welterweight in Brady.