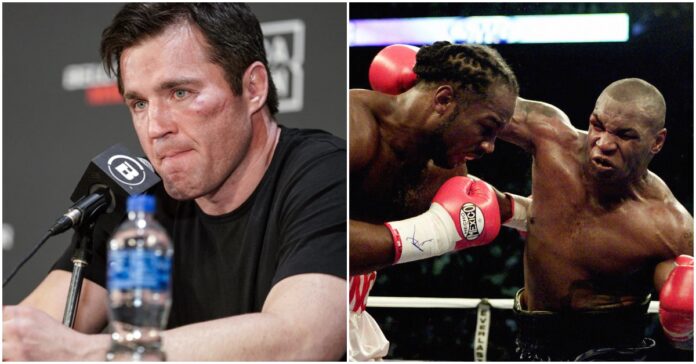 In 2002, Tyson was stopped in the eighth round by Lewis, as ‘The Lion’ defended his Heavyweight belts in Memphis, Tennessee, where the pay-per-view sold for over $50 in the United States.

‘The American Gangster’ claimed on his YouTube that Tyson “stole” the money from loyal and dedicated boxing fans after ‘Iron Mike’ admitted that his rivalry with Lewis was staged to help sell the fight.

“I will tell you nothing stands out to me more and I have a resentment to it to this day,” Chael Sonnen exclaimed.

“He fought Lennox Lewis and he’s a thief for doing it. And then he comes out after the fight, grabs the microphone before he even leaves the ring and says, ‘That was all for promotion, I love this guy.’

“Fair enough, I’m glad that you two worked it out but you defrauded me and the rest of the public out of $50 so give me my money back.” (Transcribed by the Mirror)

Why did Chael Sonnen bring up the Mike Tyson and Lennox Lewis rivalry?

The 44-year-old used the comparison of their clash to the up incoming UFC PPV headline event between a welterweight grudge Jorge Masvidal and Colby Covington.

With ‘Iron Mike’ and Lennox Lewis was originally scheduled to be set in Las Vegas in 2002, however, was suspended and relocated after the pair got into an altercation at a pre-fight conference.

Do you think Chael Sonnen have a point?