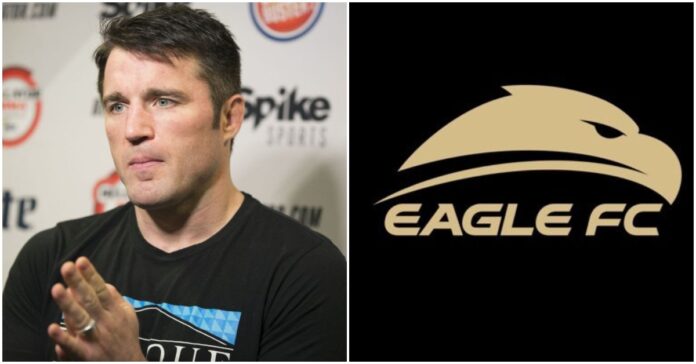 Chael Sonnen joined Eagle FC as an analyst and will make his broadcast debut with the promotion at Eagle FC 44 this Friday.

Sonnen who had a successful time competing in the cage also found great success out of it following his retirement. Chael Sonnen who is often involved within a similar role at the UFC with ESPN also has provided the same for Bellator whilst creating and delivering content through his own YouTube channel.

The promotion announced the news via their social media and revealed Sonnen would be involved in this weekend’s action, as Tyrone Spong takes on Sergei Kharitonov.

This isn’t the only big-name signing Khabib Nurmagomedov’s promotion has made. Prior to this announcement, the organization had revealed that former two-division champion Henry Cejudo will be joining the commentary team alongside former Invicta FC featherweight champion Felica Spencer. It’s not just the commentary team that has acquired some big names as the promotion has also signed fighters such as Rashad Evans, Ray Borg, and Bigfoot Silva.

The promotion makes its debut this weekend, although they have already secured plans for the second event to take place in March. The main event is set to be led by the new 165lb division which will see former UFC competitors Kevin Lee and Diego Sanchez battle it out.

The card this weekend also sees the return of former UFC competitor Yorgan De Castro taking on Shaun Asher. De Castro started well in the UFC with a first-round finish over Justin Tafa, however, he would then lose three on the bounce before being released by the promotion. De Castro recently revealed that he is happy under Eagle FC and for the first time in his career is focusing on fighting full time.

Will you be watching Eagle FC 44 this Friday?