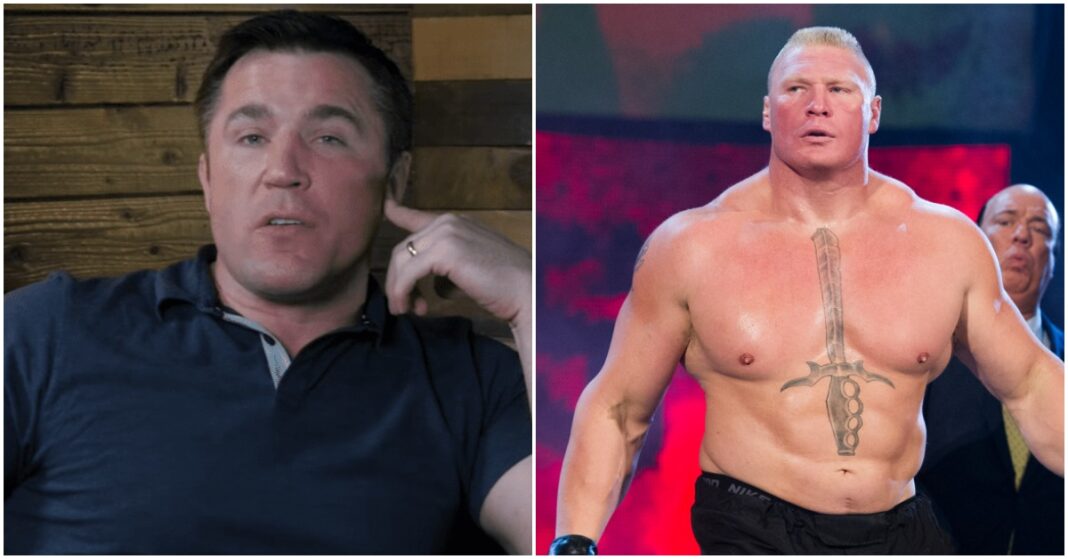 Chael Sonnen doesn’t believe Brock Lesnar is a particularly good wrestler and says he was only able to achieve so much in the sport because of his size.

Lesnar was the NCAA Division I heavyweight wrestling champion in 2000, but Sonnen dismissed his win because he outweighed his final opponent by 45lbs.

Speaking on his Beyond the Fight YouTube show, Sonnen compared how Lesnar used his size advantage to how Francis Ngannou did in his recent UFC heavyweight title win against Stipe Miocic.

“Nobody else talks about it. I bring it up to try to prove a point,” Sonnen said. “When you have Francis Ngannou who’s 260 pounds of steel and you put him in with Stipe Miocic who’s 230 pounds, there’s 30 pounds the right way disadvantage to Stipe.

“Brock Lesnar does not enjoy my company. I’ve been around Brock and he’s been a gentleman. But I can tell he’d rather be anywhere else but me. But one point that I make about Brock, it’s not meant to slide him. Brock was not a very good wrestler. That’s true. Brock never had Olympic aspirations… Brock was 265 pounds of steel. In the NCAA finals, he took on someone who weighed 220 pounds. There is a 45-pound weight discrepancy. It’s a fair point by me and it irritates Brock. But I’m right. I am right when I say it about Francis.” (Transcribed by Sportskeeda)

Despite what Sonnen has to say about him, Lesnar has carved out a pretty impressive career as a professional wrestler and even successfully transitioned to MMA, winning the UFC heavyweight title.

Lesnar last appeared in the UFC in 2016 when he defeated Mark Hunt by decision. This result later got overturned to a no-contest as the American tested positive for a banned substance.

After some uncertainty about his professional future, Lesnar recently re-signed with the WWE and simultaneously brought a conclusive end to his MMA career.

Do you agree with Chael Sonnen on Brock Lesnar’s lack of wrestling skills?