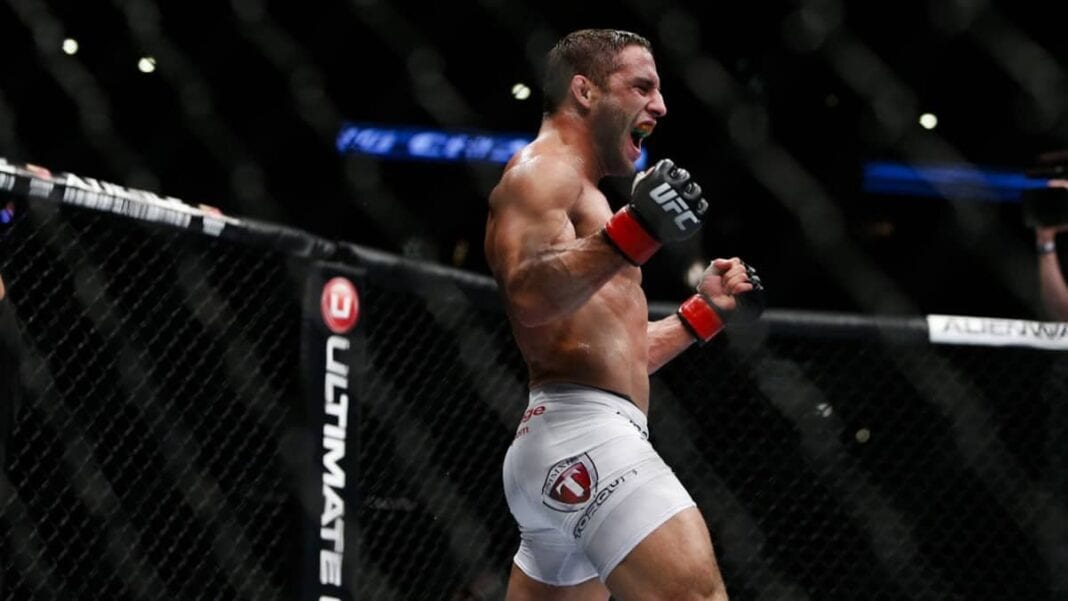 Team Alpha Male staple and current No. 1-ranked featherweight Chad “Money” Mendes has remained a force in the 145-pound division over the past few years, fighting reigning champion Jose Aldo twice, with the rematch being one of the best fights of the year last October. Mendes has now gotten another golden opportunity, as he has been called on meet the “Notorious” Conor McGregor for an interim title at July 11’s UFC 189 after Aldo was forced out due to injury.

Although many were disappointed when Aldo dropped out after the months of bad blood, and hype, McGregor and Mendes have some beef of their own, and it seems to be an intriguing replacement. McGregor has bashed “Money” for his height, but the two also got into it months back on a BT Sport segment, where the “Notorious” one subsequently said that he would rest his balls on Mendes’ head.

Speaking at the UFC 189 media conference call yesterday (July 1, 2015), Mendes said that it wasn’t the height comments that got to him, but rather McGregor’s comments on BT Sport. “Money” noted that it was very unprofessional, and that he’s looking to seriously hurt the Irish Bad Boy (Via MMAFighting):

“I mean, the short sh*t, I don’t give a sh*t about that kind of stuff, I’ve been short my whole life,” Mendes said. “But, for me it was we had to do an interview right before my Aldo fight and he was talking about putting balls on my head and just being very unprofessional. This is something that, that made it personal. And for me, you don’t f*cking do that. This is the fight game, where somebody could get seriously injured, and that’s what I’m looking to do when I get in there against Conor McGregor.”

The “Notorious” one is known for his brash personality and his obvious confidence, and he had previously said that he would have finished Aldo within the first four minutes of the first round. When he appeared on SportsCenter with UFC president Dana White, McGregor predicted the same amount of time for Mendes.

“Money”, however, feels as if it will take him a tad bit longer, but has no doubts that he will finish McGregor:

“Yeah, Conor I’m going to give you a little more respect buddy,” he said. “I’m going to finish you within the first three.”

Mendes, showing confidence just like his Irish counterpart, believes that he has all of the tools to beat McGregor, and that the fight is his:

“I think my striking is going to be great,” he said. “Conor’s never faced anybody like me before. I have the athleticism, the strength, the power, the speed, and I have wrestling to put him on his back to finish this fight. This fight is mine.”

How do you see this bout playing out?