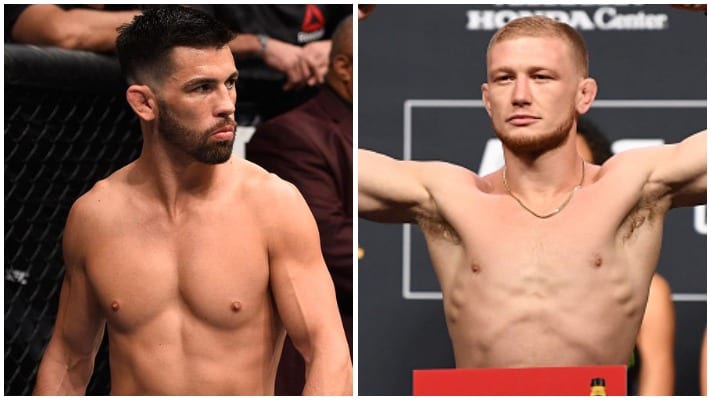 Casey Kenney is only targeting big names from hereon out.

It’s undoubtedly the biggest fight of Kenney’s career, especially with Cruz being one of the pioneers of the bantamweight division as well as arguably the greatest 135er of all time.

Kenney even used to watch him fight, but will not be awestruck when he steps opposite the cage from him.

“I think I was in college or just on the summer of college break and I was trying to decide whether I wanted to go back or become a fighter,” Kenney told Middle Easy. “My friends and I used to sit around and watch UFC fights. Of course him (Cruz) and Faber went at it. They were the lighter guys, and they were just bringing in the (1)35 and (1)45 division too. So I been watching Dominick Cruz as far back as 2011.

“It means a lot to fight him, but at the end of the day he’s just another guy. He’s across the cage from me and in my way. He’s a legend of the sport. But all of that changes when we get locked in there.”

A win over Cruz would put Kenney on a four-fight winning streak and likely move him up the bantamweight ranks further.

And while he is not looking past Cruz, he is ideally looking to face more former champions in the division before eventually challenging for the title.

“Obviously I’m in the top 15 now. The number doesn’t really matter to me,” Kenney added. “But you beat a former champion, I feel like i’d deserve another former champion. And there’s a handful of them to pick from.

“I wouldn’t mind getting (Jose) Aldo or (TJ) Dillashaw. Aldo, Dillashaw or Garbrandt. Those are three former champions that I’ve thought of. So (I’ll) take out a couple former champs and we can go from there.”

Do you think Kenney will beat Cruz? Or will this be a case of the veteran coming out on top?