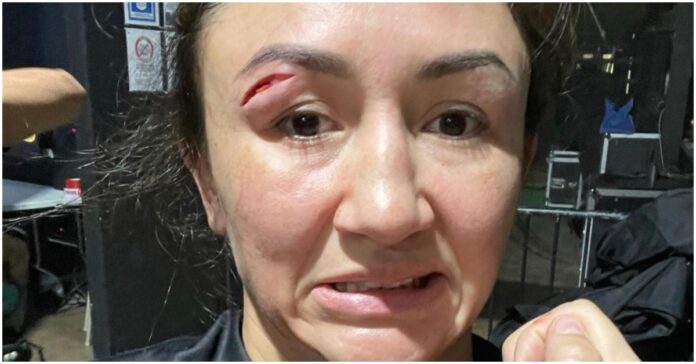 The Fury Grappling 3 event last night had a few surprising results including four current fighters on the UFC roster going down with a loss.

Former UFC strawweight champion Carla Esparza, along with welterweights Donald Cerrone, Neil Magny, and Kevin Holland were all defeated in Philadelphia. Esparza was busted open and required stitches above her eye after receiving a nasty gash during a slam where her and Danielle Kelly’s heads collided on the way down.

Esparaza’s gash is cause for concern as she is lined up to fight for the Strawweight title against Rose Namajunas sometime in the first half of 2022. Although the injury does not appear to be serious enough to cancel the unannounced title bout.

“Sorry guys, accidental head butt on a slam led to a cut and a stop in the match. In good spirits!” Esparza wrote on Instagram. “Just gotta get a couple stitches. Thanks so much Fury Grappling for having me, and Danielle Kelly for the match.”

How will Carla Esparza do against Rose Namajunes in 2022?