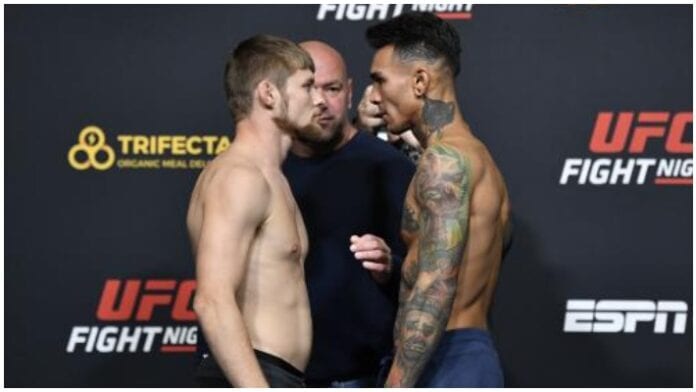 Up next, we have an interesting featherweight fight. The unbeaten prospect Bryce Mitchell faces the toughest test of his career when he takes on Andre Fili at UFC Vegas 12. Who’ll win? Let’s find out…

Round 1: Bryce Mitchell is using his kicks early to maintain range. He shoots in for a takedown. Andre Fili is defending well but ultimately succumbs to the grappling pressure. ‘Touchy’ is trying to work his way back up but Mitchell drags him back down and moves into the mount. Fili again squirms out of a tough spot before being dragged back down. Both men clearly have immense grappling ability – this should be a fun fight. Another scramble and Fili is back to his feet but Mitchell switches to the back and drags the fight back down. He moves into full mount. Mitchell postures up and starts dropping straight shots. Fili uses the space to explode out of the position. Mitchell tries to lock up a triangle choke but falls to his back and Fili is finally able to completely get back to his feet. Unfortunately for ‘Touchy’, the fight doesn’t stay there for long. Mitchell lands a punch upstairs before completing a takedown and riding out round one in top position.

Round 2: Mitchell opens up with two huge left hands at the start of round one. He shoots for a takedown but Fili manages to avoid it and separate. Another big punch from Mitchell. Fili doesn’t seem at all fazed by this. ‘Touchy’ lands a sharp knee and begins pouring it on. Mitchell lands a right hand before shooting in for the takedown. The fight is against the fence but Fili again manages to avoid being taken to the mat. The featherweight veteran is enjoying a much better round, he’s putting his hands together and defending takedowns. Three minutes into round two Mitchell finally secures the takedown he’s been working so hard for. ”Thug Nasty’ is in side control and is working for the von flue choke – it looks tight but Fili manages to escape. A huge explosion from Fili at the round of round two brings the fight back to the feet. Mitchell’s mouthpiece goes flying out of his mouth. A clash sees the 26-year-old on his back as Fili tries to land ground and pound before the horn sounds.

Round 3: Mitchell secures a takedown about 30 seconds into the final round – this could be huge. ‘Thug Nasty’ seems content to sit in the guard and land short shots whenever he can. Fili is scrambling and eventually get back to his feet but is immediately dragged back down. Once there Fili explodes again and ends up in top position. He land a shot on ground before standing up. Mitchell scores with his hands before again dragging ‘Touchy’ to the mat. ‘Thug Nasty’ is trying to move into side control, he’s landing elbows in the process. Fili continues to space on the ground – he’s clearly talented in this area. He’s trying for submission but the clock is ticking down and we are into the final 30 seconds. Fili stands up with 10 seconds left on the clock but he eats a straight shot and is taken down once again as the buzzer sounds to end round three and this fight.