LowKickMMA.com
Home UFC News Brian Stann Opens Up On His Decision To Depart From UFC 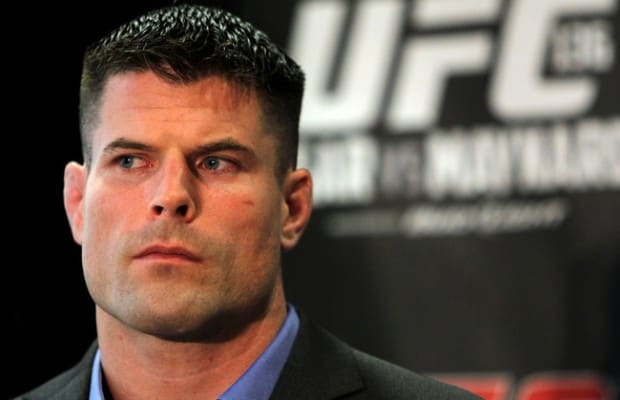 Former MMA fighter turned color commentator Brian Stann is no longer under contract with the UFC. He made the announcement last month in a post shared on his official Instagram account. He noted that he is resigning from his position as UFC color commentator to pursue other opportunities.

Stann, one of the most respected figures ever to enter MMA, never wanted his exit from the world of MMA to be a big deal. Thus, the reason he announced his departure the Monday before Mayweather vs. McGregor in hopes that his decision would quickly fade into the news cycle.

His new career starts next Monday when he begins his new role as a Chief Operating Officer of a company he only described as a “large real estate firm.” Stann spoke with Ariel Helwani on The MMA Hour this week to talk about his departure.

“I spent the entire (past) weekend with my kids, and I’ve been able to do that for several weekends in a row, which doesn’t typically happen for me, and that’s a big reason why this switch took place,” Stann explained on The MMA Hour. “As you know, I love calling fights, and I loved being a sports analyst. I loved my time in college football and I loved my time calling fights in the UFC, and for a long time I thought, ‘hey, this is something I’m going to do for the next 15 to 20 years.’ The difficulty becomes, obviously, that you’re always working the weekends. Just for a stateside fight in the country, I would leave on Thursday, I wouldn’t come home until Sunday. If I was going out of the country, which I did a lot of international shows, I would leave on a Wednesday, I wouldn’t get home until Monday.

“I did 26 shows last year alone, that’s half the weekends. And even if I didn’t work a regular job — which I do — even if I didn’t work a regular job, that’s a lot of time to be away from my family. And as my girls get older, I mean, I’m missing soccer games, I can’t coach any of my kids’ teams. Eventually I’m going to start missing semis, homecoming, proms, things of that nature if this is my chosen career path. And ultimately, in addition to the time away from family, there’s just no guarantees in television, right? Things can change in the heat of the moment.

“We don’t know what network the UFC is going to be on in a year-and-a-half. They don’t know. They’re going to go through those deals, and for guys like me, what happens? I’ve got three kids, and as comfortable and secure as I feel in my abilities as an analyst, there’s a lot that’s up in air that’s kind of left to chance there. And then, really the third reason, and this would occur to me a lot — as much as I loved calling fights and I thought about my future, I’m not building anything, I’m not leading anything, and I just, I didn’t want that to be my career. When I look back at what I’ve done with the best years of my professional life, I didn’t want to just say, ‘Man, I called some really great fights.’ I wanted to do something a little bit more than that.”

The UFC’s seven-year broadcast partnership with FOX is scheduled to expire in 2018. This means that a bidding war is likely on deck between networks looking to add the UFC’s programming to their broadcast slates. With TV being so unpredictable, it’s impossible to predict what will happen to on-air UFC on FOX talent like Stann once that time comes.

“I decided to begin applying to a bunch of elite executive MBA programs,” Stann said. “And I thought to myself, after seeing Mike Goldberg leave, after seeing Kenny Florian kind of doing some different things, after seeing all of the changes at ESPN and all the changes at FOX Sports 1, you start to realize, ‘Man, a career in television, there’s a lot left up in the air.’ Just because people love you now at 36 does not mean they’ll love you when you’re 45. And so, when a bulk of my income is all resting in a fate that I really don’t have a lot of control over, I thought ‘OK, I want to hedge my bets and I’d like to go back to school, and I think getting an elite MBA would be very beneficial.’

“So I did that, and out of the programs that I applied to, I chose Kellogg. It just seemed to work with my schedule best. And I had a great conversation with (television executive) Craig Borsari at the UFC, and I felt that he was really upfront and honest with me about the unknowns of the television future, in terms of what network they may be on. It could be FOX, it could be a number (of different networks), it could split. We don’t know, and so there’s no guarantee that they can give me right now, outside of the fact of saying, ‘Hey look, we really love your work, we appreciate everything you’re doing, and we plan to use you very often, but there’s no guarantee there.’

“So when [the new offer came], the opportunity was just far too good to pass up,” Stann continued. “It’s an incredible company, it’s fast-growing, it’s got a great private equity company behind it that I really respect the leadership. The CEO of the company, who I’m going to work directly for, is a very, very intelligent man with a lot of experience. He’s a great leader, he’s someone I’m going to learn a tremendous amount from. And there’s an executive team at that company and some hard-working employees that I’m going to learn a lot from. It’s an opportunity that I simply can’t pass up, where I’m going to get the chance to build something in a company that’s going to probably triple in size in the next two years.”

Stann, who had a memorable run through the sport, earned some publicity as a fighter in the WEC due to his background as a Silver Star winner for valor as a Marine Corps lieutenant during the Iraq War. While under the WEC banner, he held the light heavyweight title. He wrapped up his career while fighting in the UFC following a second-round TKO loss to Wanderlei Silva on March 3rd, 2013. His pro record was 12-6.

“I didn’t call [the UFC] to negotiate because I didn’t think that was right,” Stann said. “It’s one of those things where, I’ve transitioned a lot in my life, and when you’re going to transition away from something that you’ve really enjoyed, that you really know you’re going to miss, you’ve got to rip the band-aid off. If you slowly peel it, even if the UFC came back and made a great offer, I was still going to sit there after these shows, flying home at 4:30 in the morning, thinking about all of the time that I missed with my family, thinking, ‘Man, this can’t last forever, what am I going to do next?’

“And if try to make this transition when I’m 40 years old, that’s an even longer part of my résumé where I’m not in a for-profit company leading as an executive, and that’s not what I wanted. And this opportunity is exactly what I was looking for, and I’m going to have a ton of responsibility. I’m going to be extremely busy, and as you know, I like being extremely busy. There’s a lot of complexities, there’s a lot of problems to solve. I love doing that, and I’m going to be able to do that while also getting my executive MBA from Kellogg at the same time, and it’s a great opportunity. And I’ll miss the UFC.

“This was difficult, because the 48 hours after I made the decision, I made the phone call to the UFC, I started to miss it,” Stann added. “It really hit me that this was real. And then I started my first — we had a launch week at Kellogg, and that’s the only time you go for a week. The rest are long weekends. And I met my entire class of 56 people, these special human beings from all over the world, they’re all brilliant and talented, and I started to communicate with some of the new leadership in the company that I’m moving over to, to start getting some new information and lean into that transition, and that helped tremendously.

“It made me realize that I made the right decision, not only for me, but most importantly for my family and their long-term success, and me being home. As a parent, we all know, the best things with our families happen on weekends. And as much as I love this sport and I love the athletes, I love the coaches, I love calling fights — man, to sacrifice half the weekends a year away from my kids, I know at 50 years old I would’ve looked back on that, I would’ve regretted it bad.”