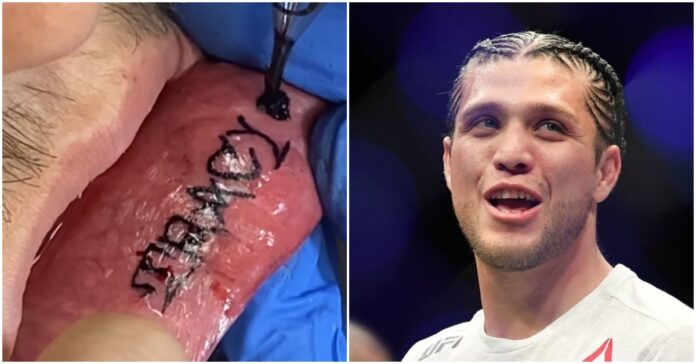 Brian Ortega decided to go one step above when gifting the love of his life a Valentines Day gift this year.

The #2 ranked featherweight is engaged to fellow UFC fighter Tracy Cortez, on February 14th Ortega uploaded a video to his social media sharing the exact moments he had his new tattoo put on.

Brian Ortega uploaded the video captioned: “All I can say is….. I LOVE HER”

The responses to Ortega’s gesture were mixed with fans either showing support to Ortega or maybe questioning his decision-making. One fan responded:

“Damn. Now my girl is gonna see this and she’ll want me to get her name tatted. Fck it! Ima get @desfrvr tatted on my lower back,”

Whilst others didn’t seem so sure about what he had done going on to call the tattoo “Questionable”.

Tracy Cortez didn’t return the favour for Ortega so don’t expect her to be rocking a lip tattoo with the name Brian on anytime soon, but she did upload videos of the pair to her social media enjoying each other’s company and sharing romantic moments.

What’s next for Brian Ortega?

At points during his clash with Alexander Volkanovski, Brian Ortega was seconds away from becoming the UFC featherweight champion. T-City would fall just short losing via decision and doesn’t appear to have a scheduled return date in place yet.  Let’s look at some of the options available for Ortega when he returns.

The first name that comes to mind is Calvin Kattar. After impressing in his performance against Giga Chikadze at the start of the year, Kattar would need to acquire another win or potentially two to earn himself a title shot and if he could best Ortega that would be a solid name to have on his resume. The same can be said for Ortega, looking to return to winning ways having only lost to the two men ranked above you a win over 4th ranked Calvin Kattar would be a huge success for Ortega over a serious contender.

Yair Rodriguez also needs a fight, the 29-year-old last outing saw him lose a decision to Max Holloway and will be looking to bounce back and kickstart his road to the title.

The last option is Dan Hooker, the Australian fights against Arnold Allen on March 19th but has already expressed his interest in taking on Brian Ortega before. Although it would be a big jump up the rankings for Hooker, I think most fans would agree this is a fight we’d like to see.

Who do you think Brian Ortega will face when he returns?