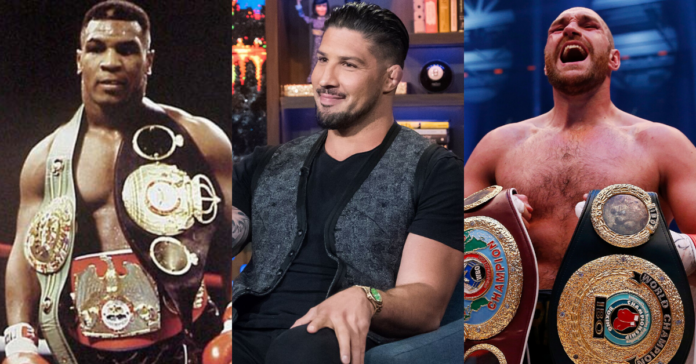 Brendan Schaub, a former UFC fighter and currently a podcast host and comedian, recently sat down with combat sports heavyweight legends Mike Tyson and Daniel Cormier to discuss a myriad of things. During the four-hour marathon show, the question of comparing boxing heavyweight champions came up.

The question was aimed at Tyson, the host asked, “Mike Tyson in his prime vs Tyson Fury in his prime. Who wins, Mike?” Comparing the all-time great ‘Iron’ Mike Tyson with the current boxing heavyweight champion Tyson Fury.

Before the legendary boxer had a chance to answer, Schaub interjected and said, “Mike, before you answer, this is no disrespect but for me, technically-wise, Fury can go defense, his footwork is great. To me, as far as technique-wise, he is the best we’ve ever had.”

Tyson Fury comes from a family of boxing enthusiasts and is, in fact, named after the heavyweight great Mike Tyson. He is the namesake of the American boxer. Knowing this, Mike Tyson answered the question with, “Listen, just him being Tyson Fury shows my greatness.”

“I don’t know. I don’t care if he could beat me or not. His name is Tyson.” Mike Tyson has spent much of his career being compared to other heavyweight greats such as Muhammad Ali. Now, Tyson is so renowned that the current heavyweight champion is named after him, which is a mark of his greatness. ‘Iron’ Mike Tyson continued, “He can beat me, but I don’t care he is named after the greatest fighter that ever lived.” [Transcript courtesy of Sportbible]

‘The Gypsy King’ Tyson Fury is unbeaten in his 33-fight career and has held numerous titles such as WBA, IBF, WBO, IBO, and The Ring heavyweight titles, among others. The English-born boxer currently seems to be aiming for a match against fellow British heavyweight Anthony Joshua, rather than the current WBA, IBF, WBO, and IBO heavyweight champion Oleksandr Usyk, of Ukraine.

Tyson, was a feared and powerful heavyweight boxer who earned the WBA, WBC, IBF, and The Ring heavyweight titles while being undefeated until his first career loss in 1990. Most notably, he has one of the most impressive records in boxing history with an 88% knockout win rate. In his mid-fifties, in 2020, ‘Iron’ Mike came out of retirement and had a boxing exhibition match against Roy Jones Jr.