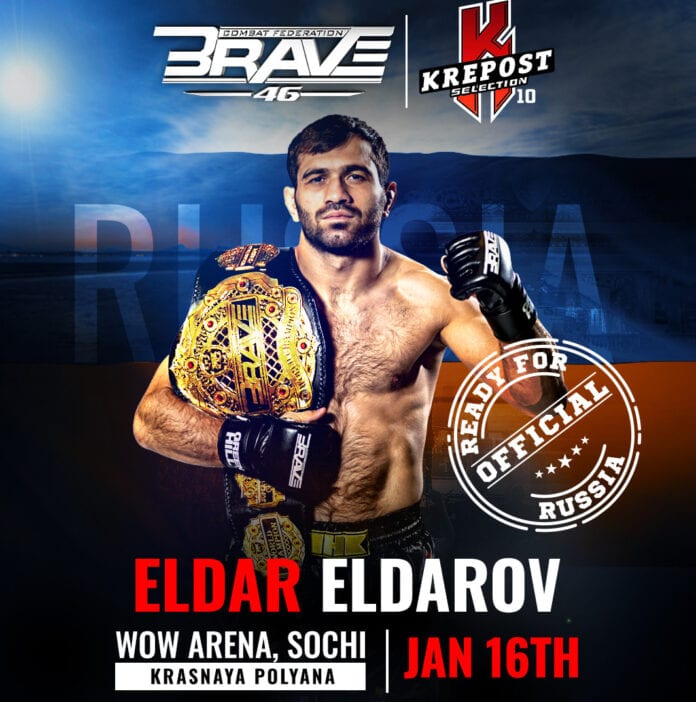 BRAVE CF will touch down in Russia on Saturday, January 16, when it holds BRAVE CF 46 in Sochi. Since its inception in 2016, the Bahrain based promotion has held events in 20 countries, with Russia set to become the 21st country in which BRAVE CF has planted its flag.

Headlining BRAVE CF 46 is a super lightweight title bout. Eldar Eldarov will defend his crown for the first time when he takes on Brazil’s Leonardo Mafra. Eldarov captured the title at BRAVE CF 23 with a dominant win over Mounir Lazzez.

The only loss of the 29-year-old Russian’s career came at the hands of Khabib Nurmagomedov back in 2009. Since then, he has gone on an eleven fight winning streak and has been one of BRAVE’s most consistent performers. Mafra is a 4-fight UFC vet who has also fought under the Pancrase banner, his most recent outing was a unanimous decision win over Djamil Chan at BRAVE CF 25.

The co-main event of the card sees the promotional debut of high-touted Russian sambo champion Ali Bagautinov. The 35-year-old is a veteran of the flyweight scene, having fought the likes of Kyoji Horiguchi and Demetrious Johnson; he also holds a win over John Lineker. Bagautinov returns to MMA after dipping his toes into boxing. He will face-off against the 24-year-old Oleg Lichkovakha, who will also be making his first appearance under the BRAVE CF banner.

The 9-bout card will also feature the return of Murtaza Talha. The two-time IMMAF world champion made his successful entry into the pro ranks with a second-round submission win over Vadim Litvin at BRAVE CF 45. The KHK MMA has a lot of hype around him, and it will be interesting to see how he fares in his second pro outing.

Below is the full lineup for BRAVE CF 46.