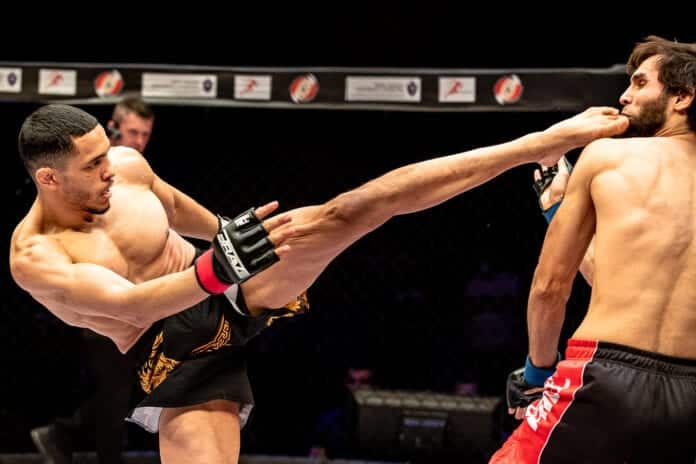 BRAVE CF 48 went down on Thursday, March 18 with the mammoth 14-fight card taking place in the Gulf State of Bahrain. It was the second of four events in the promotion’s Kombat Kingdom series, which sees four events being held over 21 days.

In the main event of BRAVE CF 48, French-Algerian Ylies Djiroun submitted Abdul-Rakhman Makhazhiev in the third round of their lightweight clash. It was the 28-year-old’s promotional debut, and the win has immediately established him as a force in BRAVE’s lightweight division.

Djiroun started the stronger of the two, dropping Makhazhiev with a vicious high-kick in the opening frame. However, the Russian was able to regroup and establish his offense in the second stanza before Djiroun stormed back to win it in the third.

In the co-main event, Lebanon’s Ahmed Labban was too good on his feet for Serbia’s Nemanja Kovac. Labban impressive striking skills saw him claim a unanimous decision victory over his opponent in their super lightweight matchup. BRAVE CF is now halfway through its Kombat Kingdom series. The promotion returns on Thursday, March 25 with BRAVE CF 49. It then wraps up the series with BRAVE CF 50 which is scheduled to take place on Thursday, April 1.

Here are the full results for BRAVE CF 48