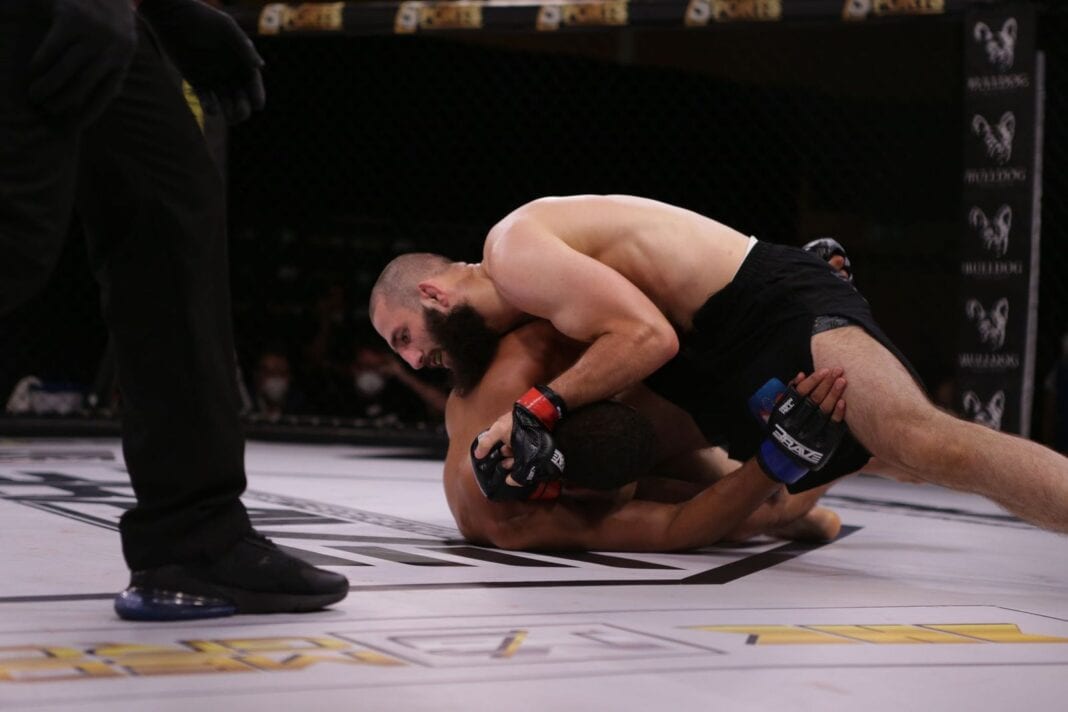 BRAVE CF 38 went down today (Sat. August 8) in Stockholm, Sweden. The nine-bout card served up a healthy mix of stoppages, surprises, and submissions.

In the evening’s main-event, Abdoul Abdouraguimov made short work of Carl Booth, as he bounced back with style following his most recent outing at BRAVE CF 27, which saw the French-Dagastani lose his BRAVE CF welterweight crown. Booth was riding a two-fight winning streak coming into this fight,and was hoping a win over Abdouraguimov would see him short-listed for a title shot. However, the Englishman had no answer to Abdouraguimov’s impressive ground game as the 25-year-old racked up his seventh submission victory.

In the co-main event, undefeated Frenchman Benoit St. Denis, known for his grappling , showcased his striking prowess as he finished England’s Mario Saeed via second round TKO in their super lightweight contest. The opening stanza was a cagey affair, which took place almost exclusively on the ground. Both men had moments of control but neither landed anything of note or came close to a submission, as the round ended in a stalemate.

The second frame started with St. Denis landing a chopping sidekick to Saeed’s abdomen. Saeed maintained his composure and went on the offensive, taking the contest to the ground and almost locking in a knee-bar. However, St. Denis was able escape back to his feet before delivering a heavy left hook followed up a thundering knee, which turned the tide in favor of the 24-year-old, forcing the referee to stop the contest.

In the only female bout of the night, Sweden’s Elin Oberg stunned her compatriot Malin Hermansson by capturing a split decision victory in their catchweight bout.

Hermansson came into this matchup on a wave of confidence after defeating Ana Maria Pal only two weeks back at BRAVE CF 35. The 30-year-old Hermansson may have been the bookies favorite, but she found it difficult dealing with Oberg’s tactical striking, with the 23-year-old landing the more significant strikes throughout the bout. She was also able to avoid any serious damage when Hermansson took the fight to the ground, and when the judge’s scores were tallied up, the BRAVE debutante had done enough to earn the win.

Earlier in the night, bantamweight Jonny Touma, making his promotional debut, had a highlight-reel moment when he dropped his opponent, Moher Azizi, with a perfectly timed spinning backfist, before going on to earn a majority decision victory.